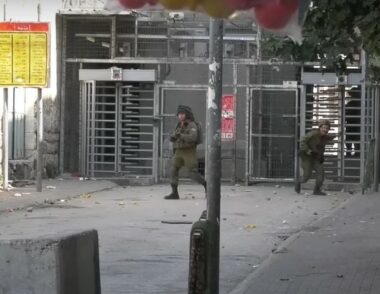 On Saturday, Israeli forces severely beat a young man in the Al-Sahla neighborhood of the city of Hebron.

The Palestinian Wafa News Agency reported that Israeli forces beat Ibrahim Al-Rajabi while he was walking with his children in Al-Sahla neighborhood in the center of Hebron.

The troops beat al-Rajabi with rifle butts and helmets, causing him injuries and bruises. He was taken to a local hospital for treatment.

The attack comes a day after Israeli troops injured over a hundred Palestinian worshipers outside the al-Aqsa mosque in Jerusalem.