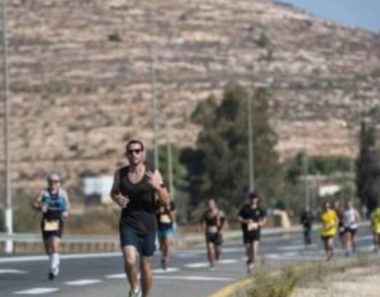 RAMALLAH, Friday, October 18, 2019 (WAFA) – Israeli forces today closed sections of the Ramallah-Nablus Road, also known as Route 60, to empty the road for dozens of settlers taking part in a marathon at the main traffic artery.

The Israeli military announced that it would erect barriers and close a section of Route 60 from 5:00 a.m. to 12:30 p.m. to allow the settlers’ marathon from the junction of Turmus Ayya village, north of Ramallah, to the junction of Za’tara village.

WAFA correspondent noted that Israeli forces sealed off the main entrance of Salfit and prevented Palestinians from using the main roads to secure the settlers’ marathon.

The marathon caused a heavy traffic jam for Palestinian traffic as Route 60 is the main road for Palestinians traveling from the southern West Bank and the center and north.

Palestinian traffic has to take alternative longer detours, including some unpaved, in order to reach their destinations.

Since the signing of the Oslo Accords, Palestinians have not been able to travel freely on Route 60, which is spotted with Israeli checkpoints when the road passes from areas under Palestinian control to areas under Israeli military control.

In addition to the checkpoints, Israel has established several ‘bypass roads’, enabling Israeli traffic to bypass areas of Route 60 that passed through Palestinian jurisdiction.