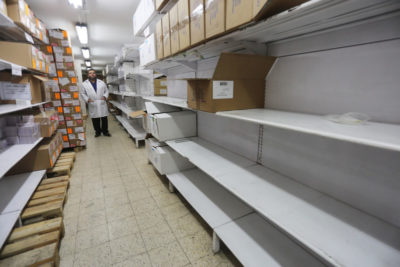 The release of two new reports point to the severity of the Israeli-imposed crisis on the Gaza Strip, with thousands of Palestinian patients — many of whom have been injured by Israeli gunfire, shells and missiles — unable to access much-needed medicines and treatment due to the ongoing Israeli siege on the Gaza Strip.

The first report, by Doctors without Borders (Médecins Sans Frontières), reports a rapid and severe increase of bone infections among injured Palestinians.

Médecins Sans Frontières (MSF) is dealing with immense challenges while treating many people who have developed bone infections after having been shot by the Israeli army during protests in Gaza, Palestine over the last year. These infections are adding to the already complicated path to recovery that these injured people must tread. Their serious and complex wounds require months – if not years – of dressing, surgery and physiotherapy. Infections prevent recovery, and to make matters worse, many of them are resistant to antibiotics.

“When you have an open fracture, you need lots of things to get better: different types of surgery, physiotherapy, and avoiding the wound becoming infected, which is a high risk with these types of injuries,” explains Aulio Castillo, MSF’s Medical Team Leader in Gaza. “Unfortunately, for many of our patients who have been shot, the severity and complexity of their wounds – combined with the severe shortage of treatments for them in Gaza – means they have now developed chronic infections.”

“What’s more, we’re finding in preliminary testing that many of these people are infected with antibiotic resistant bacteria,” says Castillo.

Gunshot wounds by their very nature are prone to infection. With a dirty foreign body breaking the skin, it is vital that the wound be cleaned to reduce the risk of infection. With injuries such as those in Gaza, where the wounds are huge, bones are splintered, and treatment is difficult, many wounds stay open long after the injury, meaning the risk of infection is drastically higher.

Complicating this is what appear to be very high rates of antibiotic resistant infections there. These infections have developed an ability to withstand many common antibiotics used to treat them. This often happens because antibiotics have been overused, whether in the community or in the environment, which is a growing problem worldwide.

Antibiotic resistance makes the already difficult task of treating people like Ayman much harder. To get better he needs antibiotics, but with the usual option useless against the resistant infection, he has to take a stronger type that carries a higher risk of side effects. These “heavy-duty” antibiotics are also much more expensive.

In the second report, focused on shortages of essential medicines, Yousef al-Jamal, writing for the Electronic Intifada, states:

Israel’s siege – imposed since 2007 – has affected Gaza’s healthcare system enormously. A new report by the World Health Organization states that of the 516 items on Gaza’s essential medicines list, nearly half had less than a month’s stock remaining in 2018. The depletion of stocks had worsened by 15 percent since the previous year, the report adds.

Data from 2019 paint a similarly disturbing picture. During August, stocks of 225 essential medicines held in the central store of Gaza’s health ministry had run out by at least 90 percent.

Rana Hussein, a nurse at al-Shifa hospital in Gaza City, says that more than 60 cancer drugs are unavailable in Gaza. Treatments for diabetes and some kidney complaints are hard to find, too.

“There are 250 patients with thalassemia [a blood disorder] who lack medication,” Hussein said.

More than 1,000 people who have been injured are awaiting limb reconstruction treatment in Gaza, Nickolay Mladenov, the United Nations’ Middle East envoy, stated last month. Unless such treatment is provided, many limbs could be lost because of infection.

Mladenov has claimed that “some improvements were felt” in Gaza’s economy over the past few months. Unemployment has dropped from 47 percent to 46.7 percent, he said.

The improvements have not been felt by many ordinary people. And human rights monitors have drawn attention to how a new method for calculating unemployment data has been introduced in Palestine.

Gisha, a group campaigning against movement restrictions, has estimated that the real level of unemployment in Gaza has risen since last year.

Wissam can have as many as five seizures per day. He has broken teeth and injured his hands while falling down.

A dose of levetiracetam – the main drug used to treat epilepsy – costs $150 each for Lina and Wissam per month – when it can be found. “This treatment is often not available in Gaza’s hospitals and pharmacies,” said Mahmoud, who does not have the money to buy the medicines, in any event.

The children’s mother Ghada is trying against the odds to remain optimistic. “After black clouds comes sunshine,” she said.

“I wish it was me [who had epilepsy], not you,” she added, looking at her children.

Imam Abdulrahman, now aged 23, was diagnosed with a heart condition in 2016. Since then he has had an aortic valve replacement operation.

It is vital that he takes regular medication to reduce the risk of a heart attack or a stroke. Like many others in Gaza, he and his family do not have the means to pay his medical bills.

Lacking a fixed job, Abdulrahman does occasional work in construction or as a cleaner.

He mainly relies on welfare payments paid to his father by the Palestinian Authority, headquartered in the occupied West Bank. The payments come to $400 and are only issued every three months.

“This is not enough money,” Abdulrahman said. “It is impossible for me to afford medicine to help me overcome my illness.”

Yousef M. Aljamal is a writer based in Gaza. Twitter: @YousefAljamal.