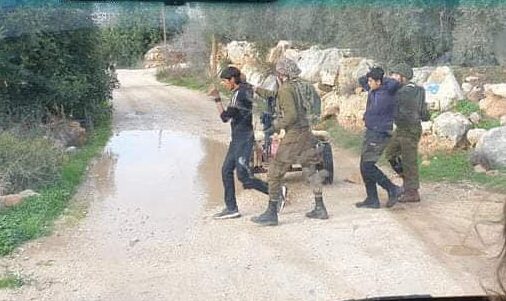 Israeli forces detained, on Friday, several Palestinian civilians and international activists, in addition to shooting one and assaulting others in various parts of the occupied West Bank, local sources reported.

At dawn on Friday, Israeli forces stormed and ransacked the homes of two Palestinians in Ya’bad town, southwest of Jenin in the northern West Bank, before detaining two men, including a former prisoner.

In the village of Azoun, east of Qalqilia, in the northern West Bank, occupation soldiers opened fire at Palestinian youths who protested their invasion, shooting one young man in the foot.

The injured man was transferred to hospital for medical intervention, after sustaining a moderate gunshot injury.

In addition, soldiers detained three minors, all aged 16, identified as Mohammad Hashash, Imad Shubeita, and Saqr Saleem. The three teens were taken to an undisclosed location.

In the occupied capital of Jerusalem, Israeli forces attacked a group of young men on Al-Wad street in the Old City, before detaining two, Quds Press reported.

The soldiers assaulted the two men, identified as Shadi Abu Sneina and Muhannad Abu Wahdan, and detained them, taking them to a nearby interrogation center.

Earlier on Friday, soldiers assaulted and detained three international activists, including a woman at the weekly solidarity gathering in the Sheikh Jarrah neighborhood of occupied Jerusalem.