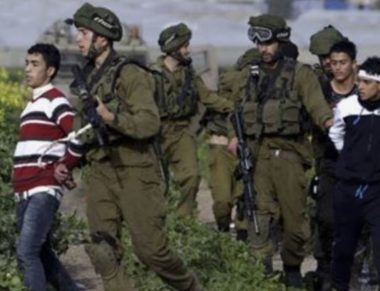 On Tuesday night and Wednesday at dawn, Israeli forces detained a number of Palestinian civilians from the occupied West Bank.

According to the Palestinian Prisoners’ Society (PPS) seven civilians were detained on Tuesday night, and at dawn on Wednesday, one of whom was shot and injured before being detained.

From the northern West Bank town of Qabatiya, south of Jenin, Muhammad Tawfiq Kamil, a family member of the teen recently killed in Jerusalem.

Ibrahim Hamarsha, director of the PPS in Tulkarem, and the father of a current detainee, was detained, along with another civilian, identified as Majd Hamesh, they were both interrogated and released.

In the central West Bank city of Salfit, a young man, identified as Nizar Darabeh, was detained.

In the southern West Bank city of Hebron, one Palestinian was shot by Israeli forces, and later arrested. No more information was available at the time of this report.

It added that child with special needs, identified as Yousef Abed, 12, was detained by the army, no information about his location was available at the time of this report.

Furthermore, the PIC reported that on Tuesday night local Palestinians also protested the Israeli military incursion into the town of Qabatiya in Jenin, in which youths were said to have opened fire at the army. Israeli forces fired live rounds, tear-gas, and concussion grenades at the protestors. No injuries were reported.

Occupation forces also stormed the home of the slain teen, Mahmoud Omar Kamil, searched the home and interrogated his family.

East of Hebron, in southern West Bank, the army opened fire at a Palestinian vehicle near Bani Naim town. The young man was moderately injured, and subsequently detained, and his vehicle was confiscated by occupation authorities.