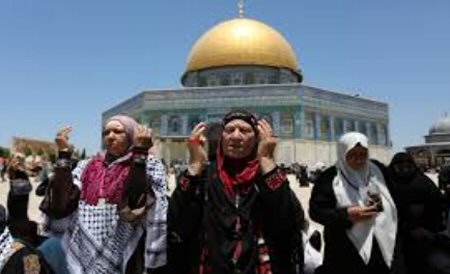 Israeli authorities, last night, broke into the Al-Aqsa Mosque Compound and drove out Palestinians performing Iʿtikāf inside its courtyards, at gunpoint.

Jerusalemite Al Ray sources reported that Israeli forces stormed the mosque, forced worshipers  out. They also photographed them and demanded their IDs.

The sources added that worshipers were prevented from capturing the event with mobiles, and seized by the passport of a Swedish worshipper, there, after he had refused to hand it over.

For over a week, Israeli forces have deliberately been targeting people performing Iʿtikāf in the courtyards of the compound, during the holy month of Ramadan, and ejecting from  its courtyards by force.