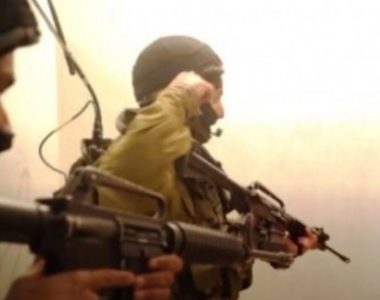 The Palestinian Prisoners‚Äô Society (PPS) has confirmed that Israeli soldiers abducted, on late at night and on Wednesday at dawn, thirteen Palestinians, among them several children including a wounding child, after invading and ransacking their homes, in several parts of the occupied West Bank.

The PPS office in Bethlehem, south of Jerusalem, said the soldiers abducted Mahmoud Hussein Salah, 15, from the al-Khader town, south of the city.

In Ramallah, in central West Bank, the soldiers abducted Jamal Abdul-Mo‚Äôti Zeid, 66, and Rashad Karaja, 50, from Safa town, west of the city, in addition to Ehab Masoud and Jamal Nibali.

In Hebron, in southern West Bank, the soldiers abducted Abed-Rabbo Mohammad at-Till, after invading and searching his home.

The soldiers also abducted Saji Abu ‚ÄòAthba, 28, and Bilal Abdullah Hotari, 25, from their homes in Qalqilia, in northern West Bank.

In occupied Jerusalem, the soldiers abducted Odah Abdullah Askar, 30, from Hizma town, northeast of the city.

Joint Press Realease: Assessing cases of the 2014 attacks on Gaza leads to definitive conclusion: victims and survivors have been abandoned to non-genuine investigations and gross injustice