Eurovision Turns Out To Be A Big Hit For Palestine 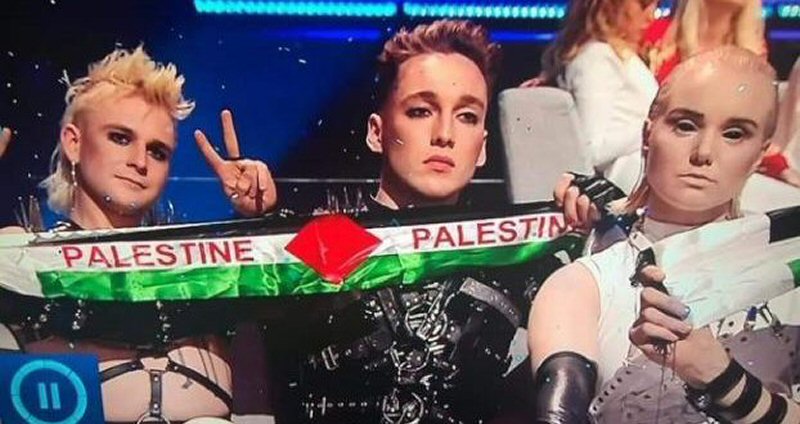 It was the result that nobody predicted: the winner of Eurovision 2019 is… Palestine!

Despite the organisers describing the Eurovision Song Contest as a non-political event, the issue of Palestine took back, front and centre stage in Tel Aviv over the weekend, which may make Israel come to regret its weaponisation of culture and the whitewashing of its discrimination against the Palestinian people.

Reaching a global audience that the pro-Palestine lobby could only dream of, Eurovision gave the Palestinian cause a platform and exposure to an audience of millions not normally confronted by Middle East politics. When you get the headline act Madonna including the Palestinian flag on the back of one of her dancers, as well as Icelandic band Hatari displaying Palestinian banners on live television, it’s hard to ignore the policies and practices of Israel, which these days are likened — with good reason — to the abhorrent apartheid system of racial segregation which once dominated life in South Africa.

Iceland’s Eurovision act could now face some sort of disciplinary action for displaying Palestinian flags during their live showpiece, according to officials who said that the issue will be discussed by the contest’s executive board. To make matters worse for the organisers, Hatari also waved Palestinian flags on screen while their public vote was being announced.

Although I didn’t watch the show myself, as I was backing the boycott campaign — normally it’s a firm favourite in the Ridley household — I’m told that attempts were made backstage to remove any Palestinian flags; those which managed to get past security did so without official approval.

The Israelis, of course, were far from happy about this. Last year, a bill was introduced in the country’s parliament which more or less proposed a total ban on Palestinian flags being flown in public in the Zionist state; “offenders” could face a prison sentence of up to 10 years if found guilty of such an “offence”.

The welcome publicity at Eurovision turned the spotlight on what is happening to Palestinians beyond the glitz and glamour associated with the contest. If officials do take action against the flag-wavers, then they will have to explain to the world why it is frowned upon to wave the Palestinian flag in Israel.

Moreover, if the Eurovision hierarchy is taking action against little-known Hatari, will they do the same to megastar Madonna? “In the live broadcast of the Eurovision Song Contest Grand Final, two of Madonna’s dancers briefly displayed the Israeli and Palestinian flags on the back of their outfits,” said officials. “This element of the performance was not part of the rehearsals which had been cleared with the [European Broadcasting Union] and the host broadcaster, KAN. The Eurovision Song Contest is a non-political event and Madonna had been made aware of this.”

Away from all the current brouhaha, maybe it’s time for Palestine to take part in Eurovision; and why not? It’s still a bit of a mystery why Israel and Australia are on the contestant list for a European competition (and, while we’re on this subject, why Israel takes part in European football tournaments); I would have thought that Palestine has just as strong a claim as Israel if geography is anything to do with it.

The moment that Israel was named as the venue for Eurovision 2019, pro-Palestine supporters seized upon the opportunity to expose the brutality of its military occupation. Calls to boycott the contest were given a boost by Mercury Prize-winning rock band Wolf Alice. In a recent MEMO article, the band gave its support to the boycott by evoking images of Israel’s domination over Palestinians saying that it was “weaponising culture” and that the Zionist state was a “serial human rights abuser” which “use[s] culture to art wash” and “whitewash over [its] human rights abuses”.

The British band Slovo, which boycotts Israel as a concert venue citing apartheid as the reason, released a song recently called: “I don’t sing for apartheid”. Other musicians around the world have promoted similar work to challenge Eurovision’s decision to allow Israel to host the show.

While the peaceful Boycott, Divestment and Sanctions (BDS) movement campaigned at every levels to persuade broadcasters, artists, bands and the global audience to boycott Eurovision 2019, there were also similar initiatives taking place within the Zionist State itself. The Israeli activists calling themselves “Breaking the Silence” urged Eurovision fans in the Israeli capital Tel Aviv to experience “the full picture” of Israel’s occupation by taking a tour to the occupied West Bank city of Hebron. Visitors there can experience the apartheid system of domination imposed there on 300,000 indigenous Palestinians living in the city.

Breaking the Silence, which was founded by former members of the Israeli army, also erected a giant billboard on the major route between Israel’s Ben Gurion Airport and Tel Aviv to highlight the brutal occupation of the Palestinian territories.

Those heading to Saturday night’s final would also have encountered protestors on the way to the venue handing out leaflets explaining how Palestinian refugees in Gaza, the occupied West Bank and beyond were made stateless by Israel’s ethnic cleansing in 1948. The leaflets would have told about the violence used to displace, expel and disappear the Palestinians before and after Israel’s creation on Palestinian land in 1948.

Eurovision featured musicians from more than 40 nations and usually attracts a global audience of 190 million people. According to early reports, though, only half of the tickets for the 2019 live show were sold; losses of around two million shekels — $559 million — are predicted.

The Eurovision Song Contest 2019 was clearly affected by the international BDS campaign and yet, paradoxically, delivered a major propaganda victory for the Palestinian people. That is why, in my opinion, they are the real winners of Saturday night’s event. Now sit back and try to imagine the impact they could have if there is a Palestinian band or singer taking part in Eurovision 2020.

(British journalist and author Yvonne Ridley provides political analysis on affairs related to the Middle East, Asia and the Global War on Terror.)