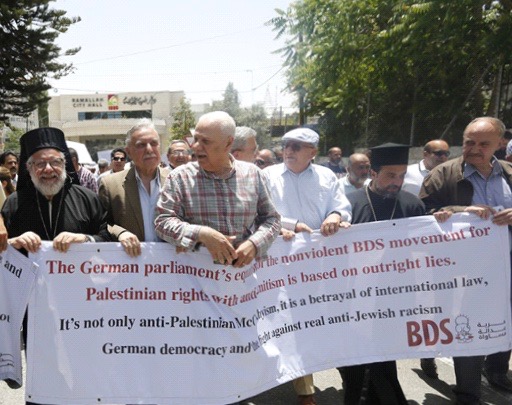 The Palestinians were there to protest the bill adopted in the German parliament, the Bundestag, labeling the Boycott, Divestment and Sanctions (BDS) movement ‘anti-Semitic’ .

The German representative was given a letter for the German government written by the Palestinian political forces and civil society, and nongovernmental organizations asking Berlin to rescind its decision to criminalize the peaceful BDS movement.

Member of the Fatah Central Committee, Jamal Muheisen said that Germany is trying to punish the victim and not the executioner by talking about anti-Semitism even though the Palestinian people and the entire Arab nation are Semitic.

“Today we live under a racist apartheid regime in the form of the Israeli occupation. Germany and the whole world are required to confront the Israeli government, which is going against all international resolutions, and not to play along with it, especially at this time when the US administration is plotting against the Palestinian national struggle,” said Muheisen.

BDS co-founder, Omar Barghouti, said the decision is a desperate attempt to criminalize the boycott movement, which has the full support of the Palestine Liberation Organization (PLO), and all the political forces and popular committees, which are struggling for the right of our people to freedom and the right of return of refugees.

He stated that the decision will not negatively affect BDS, but will show the hypocrisy of the German parliament, which succumbs to the pressure of the Zionist lobby and the rising fascism in Germany, which tries to criminalize BDS by claiming it is anti-Jewish.

He continued, saying, that this if far from the truth, adding that all those involved are against the Israeli colonial and racist regime and the Apartheid system, and have never been anti-Jewish, they reject racism in all its forms, including anti-Semitism.

Human Rights group Al-Haq Director, Shaawan Jabarin, said that the German parliament’s decision, was not a binding law until this moment, and urged the importance of sending a message to the German government not to turn it into a binding law, or implement, it because it violates the German constitution and the Human Rights Charter.

He added, “The boycott movement is not based on belief or ethnicity, and it is not directed against the Jews, but against the practices of the state and the political entity represented by the State of Israel, that commits war crimes.”