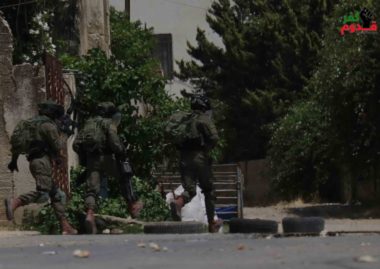 Israeli soldiers injured, Friday, five Palestinians during the weekly procession in Kufur Qaddoum, near Qalqilia, in the northern part of the occupied West Bank.

Morad Eshteiwi, the coordinator of the Popular Committee against the Annexation Wall and Colonies in Kufur Qaddoum, stated that dozens of soldiers invaded the village, and troops suppressed the protesters by firing rubber-coated steel rounds, sponge-tipped rounds and tear-gas bombs, wounding five Palestinians, including three journalists.

Local medics provided the needed treatment to all wounded Palestinians without the need for hospitalization. The Palestinian Journalists’ Syndicate issued a statement strongly denouncing Israel’s deliberate targeting of the journalists, as part of a systematic policy targeting media outlets and reporters in occupied Palestine.

Two Palestinian journalists, identified as Yasser Mortaja,  31, and Ahmad Mohammad Abu Hussein. 25, were shot and killed by Israeli troops at the border between Israel and Gaza during the Great March of Return protests that began in March of 2018, and one journalist, identified as Mai Abu Roweida, 23, lost her eye as a result of being shot by the Israeli military, in the eastern part of the Gaza Strip.