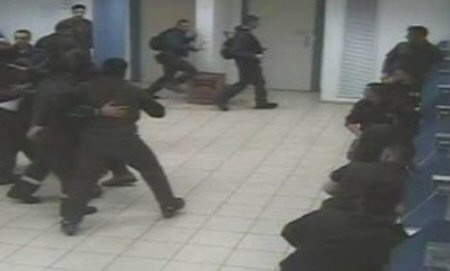 On Tuesday evening, Israeli restraining forces of the Israeli Prison Service (IPS) stormed the prisoners’ chambers in Section 5 of Ramon Prison, where the Secretary-General of the Popular Front for the Liberation of Palestine (PFLP), Ahmed Sa’adat, is detained.

They raided and vandalized the chambers, on the backdrop of an Egyptian newspaper interview with Sa’adat.

Handalah Centre for detainees and ex- detainees’ affairs said, in a statement, that “Dror” and “Yamas” units stormed and ruined the chambers, handcuffed the Palestinian detainees, and confiscated the prisoners’ personal belongings.

A state of tension reportedly enveloped Ramon detention center, as IPS attacked Palestinian detainees who are members of the PELP. The PELP representative threatens protest procedures in response to the attack.

The newspaper published a special interview with Sa’adat a few days ago, talking about many critical national files in the Palestinian arena.