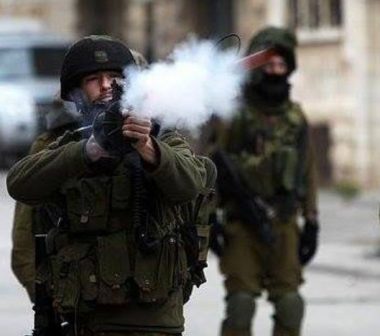 Israeli forces, Wednesday, attacked a school with tear gas canisters in Nahalin town, to the west of Bethlehem, said a municipal source.

He said that the soldiers fired a barrage of tear gas canisters at the school, causing panic among the students and a number of suffocation cases.

He added that residents attempted to take their children from the school, but were prevented by the soldiers.

Meanwhile, Israeli soldiers broke into Sebastia, north of the West Bank, to provide protection for hundreds of settlers who stormed the town’s archaeological site, triggering clashes.

Sebastia mayor Mohammed Azem said that soldiers entered the town to facilitate entry of three busloads of fanatical Jewish settlers to the archeological site, where they performed religious rituals.

Residents confronted the settlers and soldiers who fired tear gas canisters at Palestinian homes and schools, causing a number of residents and school children to suffocate.

Sebastia officials fear the settlers’ plan to take over the archaeological site, considered to be one of the main Palestinian tourist attractions, and where John the Baptist is believed buried.