Internationals Penalized for Support of Palestine 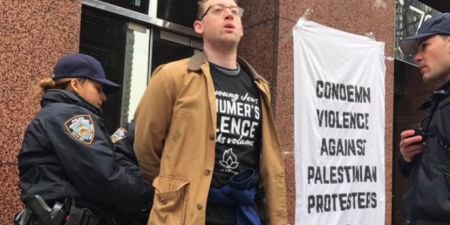 Eight American Jews from the “If Not Now Movement” were arrested in front of US Senator Chuck Schumer’s office in Manhattan, on Monday.

The activists were chanting, “How many more Chuck?” referring to the number of Palestinian protesters killed at the Gaza Border.

The New York senator has not bothered to shake his head at the Israeli government’s reaction to protesters, let alone speak out against the violence. Though not surprising to Palestinian-Americans, American Jews are appalled at the senator’s silence.

After If Not Now, activists requested the senator’s office to release a statement condemning Israel’s use of live fire during the Gaza border protests, which have left more than 30 Palestinians dead and thousands wounded. Senator Schumer’s staff rebuked the protester’s request, sparking a blockade to his office on Monday.

The members of If Not Now gathered in front of Schumer’s office protesting his silence, standing in solidarity with Palestinian protesters and reciting the Qaddish, a Jewish prayer for the souls of the dead, the families that mourn, and the call for universal peace.

An aid from his office stated that Israel’s actions in Gaza should be considered as a violation of the “Leahy Law,” a US law that prohibits aid to foreign military units that engage in human rights violations.

After statements made by Senator Sanders and Senator Leahy’s office, representatives Betty McCollum of Minnesota and Barbara Lee of California also tweeted their concern and called on the international community to do more to end the violence and resolve the conflict.

Even so, Senator Schumer has remained silent to what the US would consider a blatant violation of the first amendment which gives ensures the, “right of the people peaceably to assemble.”

In related news, the Israeli government recently barred Dublin Lord Mayor Mícheál Mac Donncha from entering Israel because of his support for the Boycott, Divestment and Sanctions movement.

According to Haaretz  newspaper, the Israeli Strategic Affairs Ministry, the organization in charge of fighting delegitimization of Israel, said that the reason for the decision was was Donncha’s ties with the Ireland Palestine Solidarity Campaign, which promotes boycotts of Israeli companies and international companies who work in Israel.

According to the ministry, the mayor promoted the IPSC’s ideas through the city council and publicly expressed support for them.

Strategic Affairs Minister Gilad Erdan said , “The policy I set is clear: He who works consistently to boycott Israel will not enter here.”

In January, Israel summoned the Irish ambassador in Israel for clarification and to express dissatisfaction in light of a proposed bill in Ireland’s national parliament calling for a boycott of Israeli settlements.