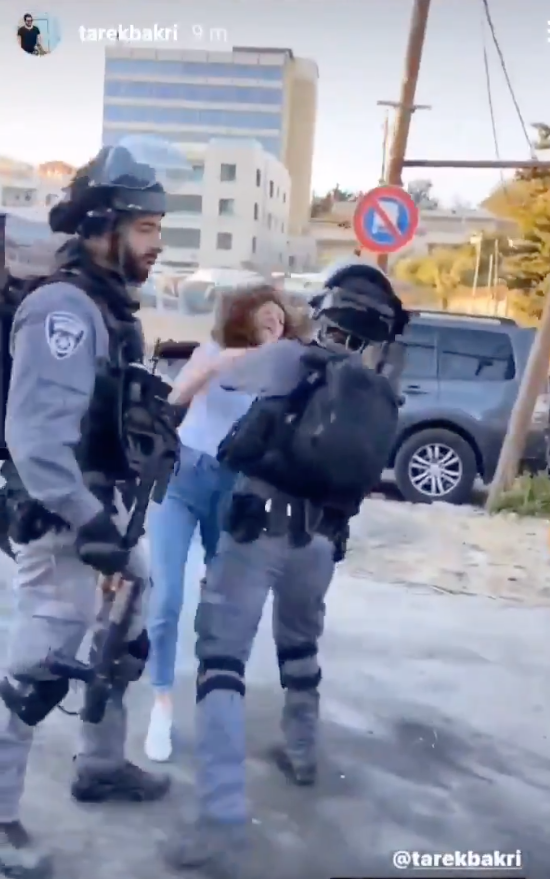 The troops moved in to the peaceful scene armed with heavy weaponry and began to beat and assault the vigil.

The soldiers also attacked a Palestinian mother and her child who were in their car nearby, reaching into the driver’s seat and pulling out the mother as her shocked child sat in the passenger seat, shocked at the sight of what the soldiers were doing to her mother.

Israeli occupation soldiers assault Palestinian women inside her car and terrorize her kids, in Sheikh Jarrah neighborhood in Jerusalem.#Gaza_Under_Attack#HearGaza pic.twitter.com/39hxJvH8gb

Sheikh Jarrah is the neighborhood in East Jerusalem where the current flare-up began.

At least 28 families, (about 550 indigenous Palestinians) live in Sheikh Jarrah and are facing eviction and displacement from their homes they inhabited more than 48 years ago.

Israel is planning to build and establish more than 540 colonialist units in the area, and is currently building 54 units, in addition to the ongoing efforts to link them with the Police Command in Sheikh Jarrah and the French Hill settlement in addition to the Hebrew University, as part of the so-called “Jerusalem Belt” colonialist plan linking the colonies with different Palestinian areas in al-‘Isawiya, Rad al-‘Amoud, Wadi ar-Rababa and many other areas, and aim at connecting East Jerusalem with West Jerusalem with this belt of illegal colonies after displacing the indigenous Palestinians.

The Israeli colonialist plan, which is intended to be implemented in phases through many years, was put forth by the government, the Jerusalem City council, the Israel Antiquities Authority and various colonialist organizations in Israel and other counties, and has a budget of 537 Billion Israeli Shekels.