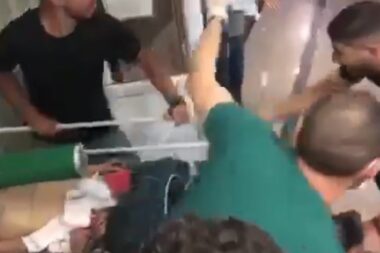 Israeli soldiers injured, on Saturday evening, fifteen Palestinians, including two who suffered a serious gunshot wound to the head, in addition to causing many to suffer the effects of tear gas inhalation, near Ramallah, in central West Bank.

The soldiers attacked dozens of Palestinian protesters at the northern entrance of the al-Biereh city, near Ramallah, and fired several live rounds, rubber-coated steel bullets, gas bombs, and concussion grenades.

The Palestinian Red Crescent Society (PRCS) has reported that one Palestinian suffered a life-threatening injury after being shot with a live round to the head.

It added that thirteen Palestinians were shot with rubber-coated steel bullets, and one with a high-velocity gas bomb.

The seriously wounded Palestinian was rushed to Palestine Medical Complex in Ramallah. Medical sources said the Palestinian’s heart stopped, but the medical teams managed to revive the young man.

Another Palestinian was also seriously injured in the abdomen and was instantly rushed to surgery.