Army Injures Six Palestinians In Jenin, Abducts One After Shooting Him In Hebron 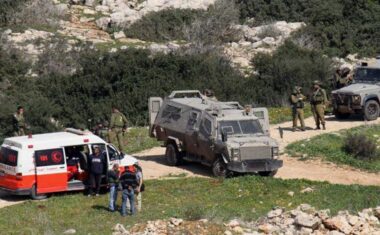 Israeli soldiers shot, Saturday, six Palestinians near the al-Jalama military roadblock, and in Toura village, in the northern West Bank governorate on Jenin, in addition to shooting and abducting one Palestinian near Hebron, in southern West Bank.

Media sources said the soldiers attacked dozens of Palestinian protesters, who marched near the al-Jalama military roadblock, northeast of Jenin, condemning the deadly Israeli escalation on Gaza, and several parts of occupied Palestine.

They added a young man was injured by bullet fragments in the head, while two were shot with live rounds in the abdomen and leg, and three who were shot with rubber-coated steel bullets. Many Palestinians suffered the effects of tear gas inhalation.

In addition, the soldiers invaded the al-Fawwar refugee camp, south of the southern West Bank city of Hebron, and leading to protests.

The army fired many live rounds, wounding a young man in the leg, before abducting him.