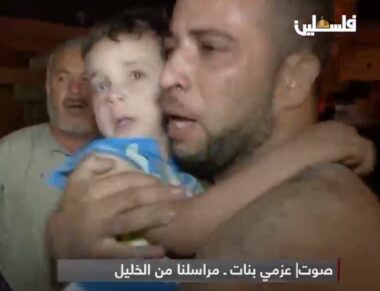 Israeli soldiers continued Sunday, the extensive invasions into several parts of the occupied West Bank, leading to protests that were met with live rounds, gas bombs, concussion grenades, and rubber-coated steel bullets, causing dozens of injuries among the Palestinians, including children, especially when the army fire gas bombs into a home.

Mahmoud Sa’adi, the director of the Jenin office of the Palestinian Red Crescent Society (PRCS), said the soldiers chased and injured a young man during protests near the al-Jalama military roadblock, east of Jenin before he was rushed to a hospital.

He added that dozens of Palestinians suffered the effects of tear gas inhalation, in addition to various cuts and bruises.

Furthermore, the soldiers invaded Bani Neim town, east of the southern West Bank city of Hebron, and attacked protesters, before shooting a young man with e rubber-coated steel bullet in the head, causing moderate wounds before he was rushed to a hospital.

The army also invaded Ethna town, west of Hebron, attacked protesters before shooting a young man in the leg.

Dozens of Palestinians suffered the effects of tear gas inhalation in the al-‘Arroub refugee camp, north of Hebron, after the army invaded it while the Palestinians were marching in solidarity with the Gaza Strip and Jerusalem.

In Hebron city, especially in the Zawiya area in the center of the city, the soldiers shot a young man with a live round in the leg, and another Palestinian with a rubber-coated steel bullet in the chest, and caused many to suffer the effects of teargas inhalation.

The soldiers also invaded the Wadi al-Harya area, south of Hebron, and attacked protesters, causing many Palestinians to suffer the effects of tear gas inhalation.

The soldiers also fired a barrage of gas bombs at a three-story home, owned by members of the al-Husseini family, in the center of Hebron city, causing a fire, and injuring many family members, including four children.

Palestinian Rescue teams and locals rushed to the property and started evacuating the family members from their home.

The family said they were sitting in their home when the soldiers fired live rounds, and high-velocity gas bombs into the building.  The family suffered the severe effects of tear gas inhalation and due to smoke from the resulting fire, in addition to anxiety attacks among the children.

In Beit Ummar town, north of Hebron, the soldiers fired gas bombs, concussion grenades, and live rounds at Palestinians, who protested the invasion, causing many injuries.

In addition, the soldiers attacked dozens of Palestinians and injured at least two, in Beit Hanina and Shu’fat, north of occupied Jerusalem. One of the wounded was shot with a rubber-coated steel bullet in the abdomen, and the other Palestinian was shot with a concussion grenade in the head.

The army attacked the Palestinians in Beit Hanina and Shu’fat after they intercepted and deterred an attack by Israeli colonialist settlers into their communities. The soldiers fired many rubber-coated steel bullets, gas bombs, and concussion grenades. Undercover soldiers also infiltrated into Beit Hanina and abducted a young man.

In Silwan town in Jerusalem, the soldiers fired a barrage of gas bombs, causing fire, and injuring several Palestinians.

In Tulkarem, in northern West Bank, the soldiers invaded Ramin town, east of the city, and fired a barrage of gas bombs and concussion grenades at protesters, and homes.

The invasion took place while dozens of fanatic Israeli colonialist settlers gathered near the entrance of the town, in preparation for invading it.

The soldiers also invaded Husan village, west of Bethlehem, leading to protests in the center of the town, the eastern area, and around the local mosque. The army fired many gas bombs, concussion grenades, and rubber-coated steel bullets, causing several injuries.

In Ramallah, in central West Bank, the soldiers invaded Nabi Saleh village, northwest of the city, and shot a young man with a live round in the abdomen, causing a moderate injury.