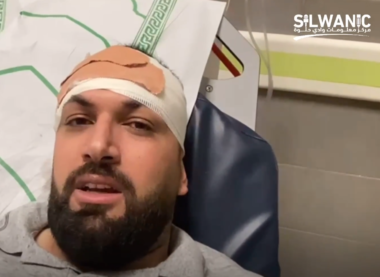 Israeli colonialist settlers shot, Sunday, two young Palestinian men while walking on the main road between Shu’fat and Beit Hanina, in occupied Jerusalem, while the soldiers shot a young man in Shu’fat.

Medical sources said a colonist shot Rauf Barakat in the abdomen while he was walking to his friend’s home, before Palestinian medics rushed him to the al-Makassed a hospital in Jerusalem.

The Palestinians had to undergo surgery that lasted for three hours, due to injuries to his intestines and liver.

In addition, a colonist shot Tamer Edrees with a live round in his arm before the assailant, and other colonists, attacked him.

Tamer said that Israeli colonists were driving five cars when they invaded the area, and about fifteen of them stepped out and started threatening to shoot the Palestinians, before opening fire.

He added that the Palestinians called the Israeli police once the colonists invaded their area, however, it took the police more than 45 minutes to arrive.

Once the police arrived, the officers fired gas bombs and rubber-coated steel bullets at the Palestinians to force them away.

In addition, the colonists infiltrated Shu’fat and tried to shoot the Palestinians, before the locals intercepted them, just shortly before the army invaded it started firing gas bombs and concussion grenades at the Palestinians, wounding a young man, identified as Mahdi al-Ammouri with a gas bomb in the forehead.

On Sunday afternoon, the soldiers killed a Palestinian, identified as Shaher Abu Khadija, 41, at the entrance of the Sheikh Jarrah neighborhood in East Jerusalem.

It is worth mentioning that, on Friday, the colonists fired many live rounds at Palestinian homes, and assaulted many Palestinians, in Silwan and Sheikh Jarrah as well as other parts of Jerusalem.