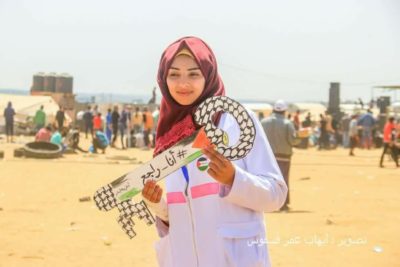 The Israeli military announced Tuesday that they have opened an investigation into the Israeli sharpshooters who targeted and killed 21-year old Palestinian medic Razan Ashraf al-Najjar during a massacre of civilians protesting at the Gaza-Israel border in May.

This is a re-opening of the initial military probe, which claimed that she had not been shot intentionally. The Military Advocate General, Brig. Gen. Sharon Afek, said that the Israeli Military police should re-open the investigation. The initial investigation involved only interviews with the soldiers who were on duty at the border the day she was killed – no interviews with Palestinian eyewitnesses, no ballistics or physical investigation, no autopsy.

Palestinian officials have called for independent, outside investigations into not only the killing of Razan, but all of the over 200 deaths by Israeli gunfire and the more than 20,000 injuries caused by Israeli forces firing into crowds of demonstrators at the border each Friday since March 30th.

Razan Ashraf Najjar, 22, was a female volunteer medic who was shot and killed by Israeli forces while helping treat wounded protesters at a ‘Great Return March’ protest on Friday June 1st, 2018. On the same day, Israeli forces injured 100 Palestinians, including 40 who were shot with live fire.

The Palestinian Health Ministry said the soldiers resorted to the excessive use of force against Palestinian protesters, participating in the Great Return March, and marching for breaking the ongoing deadly Israeli siege on the Gaza Strip.

Dr. Ashraf al-Qedra, the spokesperson of the Health Ministry in Gaza, stated that the Razan was killed by live Israeli army fire after the soldiers targeted five medics providing treatment to wounded Palestinians in the “Return Camp,” east of Khan Younis, in the southern part of the Gaza Strip. Prior to her injury, Razan, managed to render aid to many wounded Palestinians, including an elderly man who suffered the effects of teargas inhalation.

Razan, who was wearing a clearly-marked medic vest, was at least 100 meters away from the eastern border fence when she was shot while providing aid to wounded Palestinians and attempting to evacuate them to the field clinic.

Razan was killed when an Israeli sniper shot her in the back, and the bullet went through her heart.

Dr. Rasha Abdul-Rahman Qdeih said she was with Razan when they were trying to help wounded Palestinians, but five army jeeps came close to the fence, before two soldiers left one of the vehicles and pointed their sniper scopes at them.

“I shouted at my colleagues to take cover and remain alert,” she said, “The soldiers fired several rounds, and some minutes later, we managed to evacuate the wounded, before the soldiers started firing gas bombs.”

“But then, the soldiers fired several exploding rounds at us; one of them struck Razan and killed her, and another bullet struck a medic, identified as Rami Abu Jazar, in his thigh, in addition to shrapnel in his left thigh, arm and leg, while another medic, Mahmoud Abdul-‘Aati, was injured by shrapnel,” Dr. Rasha added.

A video taken just before Razan was killed shows the medics far from the border fence, wearing clearly marked white jackets and medic vests, and holding their hands in the air.

It is worth mentioning that Razan was the second medic to be killed by Israeli army fire since March 30th, after the soldiers killed Mousa Jaber Abu Hassanein, 36, who was shot on May 14th, while wearing a clearly marked medic vest. Since then, several other medica have also been killed.

The soldiers also injured 223 medics, including 29 who were shot with live fire or after being directly targeted with high-velocity gas bombs.

At the time of her killing, Dr. Mustafa Barghouthi, the head of the Palestinian Medical Relief Society (PMRS), said the killing of the volunteer medic is another crime committed by Israel against innocent civilians, including medics and journalists, and added that the medical teams would continue their humanitarian duties despite the Israeli violations, and constant escalation.

Meanwhile, the most recent attack on civilians by Israeli forces, on Sunday evening October 29th, in which 3 children aged 13 and 14 were killed, has led to international calls for Israel to be investigated for war crimes by the International Criminal Court.

In May, just before Razan was killed, the UN Human Rights Council voted to launch an investigation into the Israeli military for killing 60 civilians in a single day, during the Palestinian Land Day protests on May 14, 2018. The US and Australia were the only two countries to vote against the resolution.

At the time, Israeli officials said they would refuse to cooperate with any such investigation. Then-U.S. ambassador to the UN, Nikki Haley, called the call for an investigation a “shameful day for human rights”, claiming that, “At a time when Venezuela lurches toward dictatorship, Iran imprisons thousands of political opponents, and ethnic cleansing has taken place in Burma, the UN’s so-called Human Rights Council has decided to launch an investigation into a democratic country’s legitimate defense of its own border against terrorist attacks”.

There has been no evidence presented to back the claim that Palestinians protesting at the border have engaged in ‘terrorist attacks’ – the protests have been mainly non-violent, with some stone-throwing and tire burning. But no Israeli soldiers have been killed or injured in the 40 weeks of protests, while over 200 Palestinians have been killed and over 20,000 have been injured – more than 4,000 of them hit with live ammunition.

As Jonathan Ofir wrote in Mondoweiss about the initial ‘investigation’ of Razan’s death, “It is extremely rare that Israeli military cases involving killings actually get to indictment, and it usually requires an actual close-up filming of the event (with the shooter and the victim) to qualify it for some sort of indictment (as in the Azarya case), or sometimes extreme legal pressure from organizations and also international pressure, as in the case of the killing of British photographer and human rights activist Tom Hurndall in Gaza, 2004.”