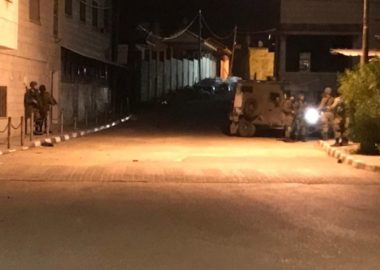 Dozens of Israeli soldiers renewed, on Tuesday at night, the invasion into Shweika area, north of Tulkarem in the northern part of the occupied West Bank, and conducted extensive and violent searches of homes.

Media sources said the soldiers stormed the area while firing dozens of live rounds, rubber-coated steel bullets, gas bombs and concussion grenades, while many Palestinian youngsters protested the invasion and hurled stones at the armored jeeps.

The sources added that, besides the armored military vehicles, the soldiers used drones in their invasion, especially in Shweika, ad-Dahia and al-Fuqaha’ areas.

The soldiers stormed and ransacked many homes, and interrogated the Palestinians while inspecting their ID cards.

The army smashed the front doors of many homes, including the home of former political prisoner Ghassan Mahdawi, in addition to Amara Abu Khweiled, and several stores and shops, including a local computer shop and a sweets shop, and ransacked them, causing excessive damage.

Earlier on Tuesday, the soldiers surrounded Shweika area, violently searched and ransacked dozens of homes, and buildings, before abducting Majed Zidan Na’alwa and Omran Hosni Abu Ahmad, from their homes.

The army also searched and ransacked many homes, and interrogated the residents while inspecting their ID cards.

During the invasion, the soldiers ransacked the home of Hanadi Walid Na’alwa, the sister of Ashraf Na’alwa, who carried out the fatal shooting in Burkan illegal colony, on October 7th 2018, and interrogated her.

The soldiers threatened to harm her and her family, and to demolish their home, if they provide any aid to Ashraf, in addition to posting his posters on many homes, walls and doors, threatening to punish any person who helps him.

Since Na’alwa carried out the shooting in Burkan colony, killing two Israelis, identified as Kim Levengrond Yehezkel, 28, from Rosh HaAyin, and Ziv Hagbi, 35, from Rishon LeZion, and fled the scene, the military started ongoing invasions into his home, and the homes of his relatives along with dozens of homes and property.

On October 15, 2018, the army invaded Shweika area in Tulkarem, and handed Ashraf’s family an official order for the demolition of their home.