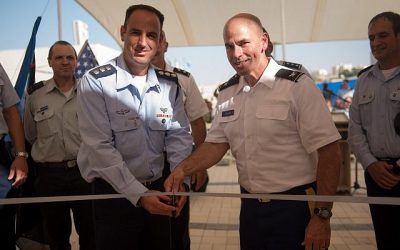 The U.S. military has long been involved with and supportive of the Israeli military, but past joint military operations have been more covert.

In addition, the base will house a missile detection and defense system as part of the Iron Dome battalion that was inaugurated in Israel this week.

An Israeli military official called the base “a joint Israeli and American effort to sustain and enhance our defensive capabilities.” Brig.-Gen. Zvika Haimovich, head of the Aerial Defense Division, told Israeli reporters Monday, “This is the first time that we have an American flag flying in an [Israeli military] base”, adding that it, “represents the long-standing partnership, the strategic commitment between the armies and the militaries of our countries, and adds another layer to the security of the State of Israel in defending [against] the threats of rocket or missile fire.”

The U.S. soldiers stationed there will be under the direction of the Israeli military – in a first for the U.S. military, which generally does not take orders from foreign militaries.

Hours after the first media reports came out about the establishment of the U.S. military base, the U.S. government issued a statement that the construction would not be a “base” but instead a “facility”.