PLO Report — Palestine and the United Nations: 70 years on 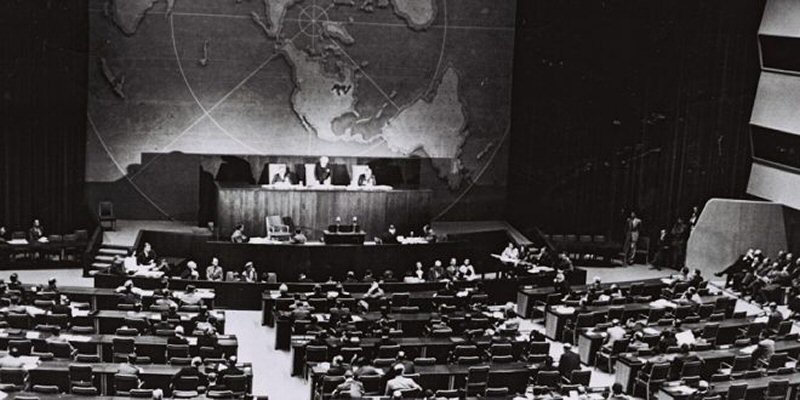 Palestine’s story at the United Nations began on 29 November 1947, with the UN General Assembly’s (UNGA) adoption of Resolution 181. The so-called “Partition Resolution” proposed, for first time in history, to divide a homeland into two states. Seven full decades since the adoption of this resolution, the Palestinian people, whether in exile or under occupation, has continued to suffer the consequences of the lack of international action in order to fulfill their inalienable rights.

Israel’s Membership at the United Nations

Israel became a member of the UNGA on 11 May 1949 through UNGA Resolution 273. Its membership, as established in the resolution, was conditioned:

“Noting furthermore the declaration by the State of Israel that it “unreservedly accepts the obligations of the United Nations Charter and undertakes to honor them from the day when it becomes a Member of the United Nations”, Recalling its resolutions of 29 November 1947 [Resolution 181] and 11 December 1948 [Resolution 194] and taking note of the declarations and explanations made by the representative of the Government of Israel before the ad hoc Political Committee in respect of the implementation of the said resolutions, The General Assembly … Decides to admit Israel to membership in the United Nations. ”[1]

To this day, Israel violates the conditions it accepted in order to become a full member of the UN, as it has failed to honor UNGA Resolution 181 (on two states) as well as UNGA Resolution 194 (on the right of return of Palestinian refugees).

The PLO enters the United Nations

On 12 December 1973, the UNGA approved resolution 3102 (XXVIII)[3], calling for national liberation movements to be invited to participate as observers in the ‘Diplomatic Conference on the Reaffirmation and Development of International Humanitarian Law Applicable in Armed Conflicts’. This was the entry point for the Palestine Liberation Organization (PLO) to participate in various international conferences.

On 14 October 1974, the UNGA adopted resolution 3210 (XXIX)[4] recognizing the PLO as the representative of the Palestinian people, inviting them to the meetings held by UNGA on the Question of Palestine. On 13 November 1974, President Yasser Arafat became the first representative of a nation that was not a full member of the organization to address the General Assembly. A few days later, the UNGA adopted Resolution 3237 granting observer status to the PLO.

The PLO Declares the State of Palestine, recognizes UNSC Resolutions

On 15 November 1988, the Palestine National Council (PNC) declared the State of Palestine (under Israeli military occupation) on the territory within the 1967 border (Gaza and the West Bank, including East Jerusalem). This declaration is often referred to as ‘Palestine’s historic compromise’, due to the acceptance of Israel over 78% of the land that was Palestine prior to 1948. The PLO also publicly endorsed internation al law and UN Resolutions. A few weeks later, President Arafat was invited to address the UN General Assembly but the United States refused to grant him an entry visa. In an unprecedented move, the UN overwhelmingly voted to move its session outside of the US,[5] welcoming President Yasser Arafat to address the organization in Geneva.[6]

President Arafat’s address called upon Israeli leaders to accept international mediation: “I have come to you in the name of our people to extend my hand so that we may establish a real, just peace. It is from this premise that I call on the leaders of Israel to come here, to come here, under UN auspices to create this peace. I also tell them that our people want dignity, freedom and peace. They want peace for their state just as they want it for all the countries and parties to the Arab-Israeli conflict.”[7]

After this meeting, the UNGA took note of the Declaration of Independence of the State of Palestine, through resolution 43/177[8], deciding to use the designation “Palestine” instead of “Palestine Liberation Organization” in the United Nations System.

Palestine is admitted to the UN General Debate

On 7 July 1998, the UNGA adopted resolution 52/250[9] “Participation of Palestine in the Work of the United Nations”. This resolution paved the road for Palestine to become a standing agenda item in the UNGA General Debate every year. Palestine was given the platform to speak during the UNGA General Debate for first time in 1988, during its 53rd plenary session. During his speech, President Arafat reminded the assembly that “the Palestinian people… this great people did not commit a crime; they did not commit aggression against anyone nor did they occupy the land of any other people. However they were the victims of aggression. Their land was occupied and they were dispersed and compelled by military force to a life in diaspora and exile … it is not admissible for Israel to continue dominating the Palestinian people”.

Palestine as a “Non-member State”

During the UNGA General Debate of 2011, the issue of Palestinian statehood and full membership in the organization received important international support. With a wave of international recognitions of the State of Palestine, President Mahmoud Abbas delivered his now famous speech of 23 September 2011: “The time has come for my courageous and proud people, after decades of displacement and colonial occupation and ceaseless suffering, to live like other peoples of the earth, free in a sovereign and independent homeland (…) I would like to inform you that, before delivering this statement, I submitted, in my capacity as the President of the State of Palestine and Chairman of the Executive Committee of the Palestine Liberation Organization, to H.E. Mr. Ban Ki-moon, Secretary-General of the United Nations, an application for the admission of Palestine on the basis of the 4 June 1967 borders, with Al-Quds Al-Sharif as its capital, as a full member of the United Nations.”[10]

Although the full membership of Palestine still has not been approved, in 2012 Palestine achieved an upgrading of its status in the organization through UNGA Resolution 67/19. This resolution granted Palestine “non-member state” status, as a state on the 1967 border with East Jerusalem as its capital. This resolution passed with the vast majority- 138 votes- in favor and only 9 against.[11]  Resolution 67/19:

The resolution also emphasized that the Government of the State of Palestine is the PLO:

“Taking into consideration that the Executive Committee of the Palestine Liberation Organization, in accordance with a decision by the Palestine National Council, is entrusted with the powers and responsibilities of the Provisional Government of the State of Palestine…”[12]

The Holy See has the same status as Palestine in the UN. In 2015, the UN voted in favor of raising the flag of its non-member states[13]. Since then both flags have been raised at the entrance of the UN buildings.

The UN Security Council and Palestine:

The UN Security Council (UNSC) has conducted extensive discussions on the issue of Palestine, without translating discussion into concrete measures to address the ongoing and systematic violations of the UN Charter by Israel. The UNSC has passed several important resolutions, including on the inadmissibility of acquiring territory by the use of force, against the annexation of East Jerusalem and Israeli measures to declare Jerusalem as its capital, calling for the application of International Humanitarian Law in the Occupied Territory, as well as several resolutions on the illegality of Israeli settlements, including the latest UNSC Resolution 2334, passed on 23 December 2016:

“[The UNSC] Reaffirms that the establishment by Israel of settlements in the Palestinian territory occupied since 1967, including East Jerusalem, has no legal validity and constitutes a flagrant violation under international law and a major obstacle to the achievement of the two-State solution and a just, lasting and comprehensive peace”. [14]

Since the UN General Assembly decided to divide Palestine, 70 years ago, the Palestinian people has suffered one of the greatest injustices seen within the international system. Denied the political right to self-determination and return, the national liberation cause of the Palestinian people was initially treated as a “humanitarian issue” by the international community. Only in 1970s was the collective voice of Palestinians heard at the UN, through the PLO.

Since then, many resolutions have been passed, reaffirming the inalienable rights of the Palestinian people as well as condemning Israeli crimes and violations; yet no action has been taken. Israel is even allowed to continue violating the conditions upon which it was granted its full UN membership. At the same time, Palestinians continue to be denied their right to be protected, have their own independent state, and return to their homeland.

Some action has been taken at the level of the UN – Human Rights Council, including the presence of Item 7 on the situation of Human Rights in the Territories Occupied by Israel since 1967, and the decision taken in March 2016 to issue a list of companies involved in Israel’s occupation and colonization of Palestine. The list is expected to be published before the end of the year, despite lobbying efforts from some parties that aim at perpetuating Israel’s impunity and the systematic violation of Palestinian rights.

In order to salvage the prospects of a just and lasting peace in the Middle East, as well as protect the credibility and mission of the United Nations, members of the international community must develop specific mechanisms of implementation and accountability concerning systematic violations of International Humanitarian Law, Human Rights Law and UN resolutions.