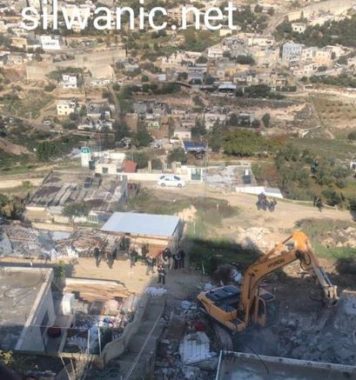 The Israeli military on Tuesday invaded the Palestinian neighborhood of Jabal al-Mukaber in Jerusalem and demolished two Palestinian-owned apartment buildings under the pretext that they were “built without a permit”.

Israel has issued no permits for Palestinians to build on their land in Jerusalem since 1967, but the excuse is frequently provided for the demolition of Palestinian homes in areas that they are trying to annex that these homes are “constructed without a permit”.

According to local news sources, the Israeli military bulldozers, backed by troops from the special forces and Israeli police from Jerusalem, stormed the neighborhood of Farouk in the Jabal al-Mukaber area of southern Jerusalem. They then surrounded two apartment buildings and prepared the demolition process.

The buildings were owned by the Aql family, and were meant to house the grown children of Amin Fahma. One of the family members is about to get married, and was supposed to move into one of the units after the wedding. The building was recently completed, and was about 200 square meters in size.

The family had filed an appeal with the court of the Israeli government’s rejection of their construction, and had just last week had that appeal denied by the Israeli High Court.