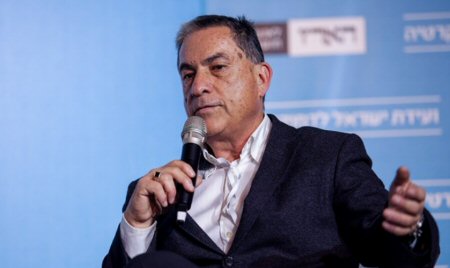 Asked about the backlash against the boycott, both in Israel and in the United States, Levy said that the BDS campaign is still “the only game in town”, a description he first used in 2016.

According to Levy, “one of the biggest successes” of the boycott has been the way it has “changed the discourse” internationally; now “people start to ask and question Zionism”, and whether “it is the only regime we can have in this piece of land”.

“This discourse is a very fascinating one,” Levy said.

Responding to the claims made by the Israeli government that the BDS movement is “anti-Semitic”, Levy dismissed such charges as “the automatic response of the Israeli propaganda against any criticism of Israel, not just BDS”.

Levy said he believes that as BDS gains more momentum, Israelis will move beyond simply dismissing the boycott as a form of anti-Semitism and ask if “there is something wrong about us”.

Despite the denial and aggression, Levy continued, “there is this knowledge that something is burning under our feet”.

Addressing the goals of the BDS movement, Levy said his understanding was that “it’s about changing the regime from an apartheid one to a democracy”.