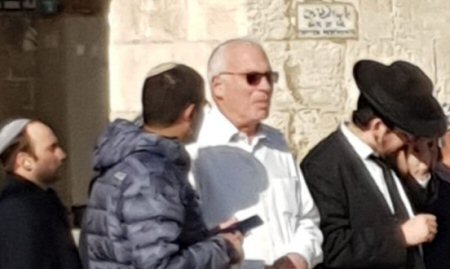 The head of the Public Relations office of the Islamic Endowment Department, Firas al-Dibs, told Maan News Agency that the Israeli Minister of Agriculture, Uri Ariel, along with many settlers and soldiers, invaded Al-Aqsa Mosque compound, in occupied Jerusalem on Tuesday, and conducted a tour meant as provocation to the Muslim worshipers.

The crowd was escorted under the protection of Israeli police, on a tour through the compound, composed of the Al-Aqsa mosque and the Dome of the Rock mosque.

The Al-Aqsa mosque is the third holiest site in Islam, and while Jewish visitation is allowed, non-Muslim worship is prohibited, according to the agreement between Israel and Jordan, the custodian of the compound.

According to al-Dibs, Israeli Members of Knesset (MK) and Israeli ministers have increased their incursions of the compound, in recent years.

Maan notes that the intrusions of Israeli non-Muslims into the Muslim holy site coincide with many bans and detentions against Palestinian worshipers.

These invasions also coincide with an increase in vandalism, arson and destruction of Muslim and Christian holy sites by right-wing Israeli Jewish zealots.