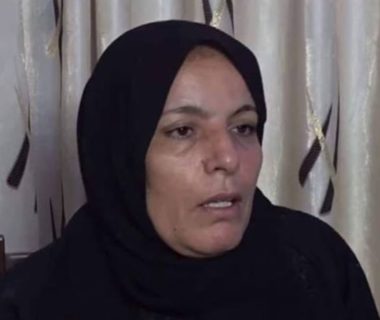 The Palestinian Detainees’ Committee has reported, Monday, that the Israeli military court in Ofer prison, near Ramallah in the central part of the occupied West Bank, has denied an appeal for the release of Wafa’ Mahdawi, 54, the mother of slain Palestinian, Ashraf Na’alwa, and her other son, Amjad Na’alwa.

The Committee stated that Wafa’ and her son Amjad were taken prisoner in October of 2018, and that, in December of 2018, their lawyer demanded their release due to the lack of evidence and credible facts, but the court refused and claimed that “if its releases the two, or places them under house arrest in Tulkarem, in northern West Bank, they will have many chances to escape.”

The Israeli Prosecution is alleging that Wafa’ “had prior knowledge that he son, Ashraf, intended to carry out a shooting attack against Israeli targets, but did not attempt t stop him,” and that his brother Amjad “obstructed the conduct of the army, by trying to hide surveillance recordings captured by their cameras around their home.”

It is worth mentioning that the Israeli army carried out, on December 13, 2018, a large military offensive into Askar refugee camp, in Nablus, and killed Ashraf, after seeking his capture or death for two months.

Ashraf is believed to be behind the fatal shooting, which was carried out on October 7th, into Barkan illegal colony, near Ariel, which was built on Palestinian lands in Salfit, killing two Israel settlers, identified as Ziv Hagbi, 35, and Kim Levengrond Yehezkel, 28, and wounding another one, before fleeing the area.

It is worth mentioning that the soldiers frequently abducted, detained and interrogated many members of Na’alwa family, and demolished the family home on December 17th, 2018, as an act of collective punishment.