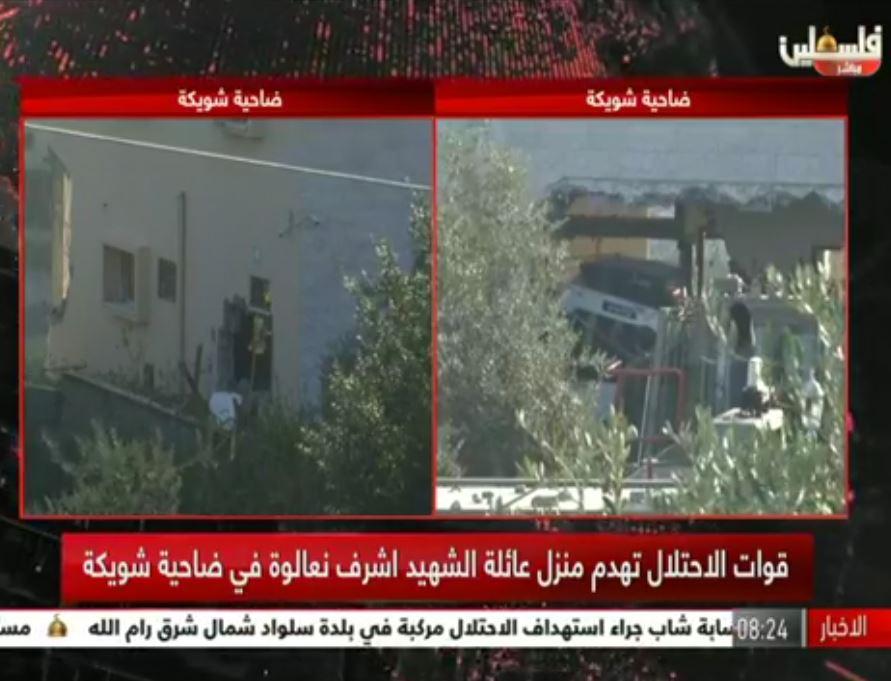 Dozens of Israeli soldiers invaded, on Monday at dawn, Shweika area, north of Tulkarem, in the northern part of the occupied West Bank, and demolished the family home of Ashraf Na’alwa,  23, who was killed by the army in a Palestinian home in Askar refugee camp, east of Nablus. The soldiers also injured seven Palestinians, and abducted three, during protests against the demotion.

Dozens of soldiers and many armored military vehicles, including bulldozers, invaded Shweika, before many Palestinian youngsters started throwing stones at them, while heading to the home, the Palestinian TV has reported.

The soldiers shot six Palestinians and abducted three others during the invasion, while all schools, including kindergartens, did not open in the morning, due to the ongoing military offensive.

The soldiers stormed and violently searched many homes, and occupied the rooftops of several buildings, near  Na’alwa family home, to use them as military towers and firing posts.

The military bulldozers then advanced to the three-story building, and knocked its foundation and main walls down, while the soldiers also manually demolished sections of the property.

The Palestinian Red Crescent Society (PRCS) in Tulkarem said the soldiers injured seven Palestinians, including three who were moved to Dr. Thabet Thabet Governmental Hospital, in Tulkarem, and are in a stable condition; one of them was shot with a rubber-coated steel bullet, and one suffered burns.

It added that four Palestinians suffered the severe effects of teargas inhalation, and received the needed treatment by medics of the Palestinian Red Crescent Society (PRCS).

The PRCS said the soldiers also fired rubber-coated steel bullets at one of its ambulances, while trying to reach wounded Palestinians.

It is worth mentioning that dozens of Palestinians gathered, on Sunday evening, in and around the Na’alwa family home, just before the army invaded the area, and forced them out, to prepare for the demolition of the property.

Ashraf Na’alwa, 23, who was killed by the army, on December 13th, 2018, at a home in Askar refugee camp, east of the northern West Bank city of Nablus, is accused of carrying out the fatal shooting in Barkan colony, illegally built on Palestinian lands.

The two Israelis have been identified as Kim Levengrond Yehezkel, 28, from Rosh HaAyin, and Ziv Hagbi, 35, from Rishon LeZion colonies.

Following the demolition, the Palestinian Authority issued a statement denouncing the Israeli violations, especially since the home demolition policy is an illegal act of collective punishment, targeting entire families.

It said that world leaders and countries must understand that Israel’s illegal occupation of Palestine, and its escalating hostile policies and violations, are the core factors of ongoing tension and violence.

The authority also called on the international community to provide the urgently-needed protection to the Palestinian civilians, and added that there can be no real peace and stability in the region as long as Israel continues its illegal occupation and violations.

It called for the immediate implementation of all United Nations and Security Council resolutions, in addition to all related international treaties and agreements, to ensure the establishment of an independent, viable and contagious Palestinian state, with east Jerusalem as its capital.