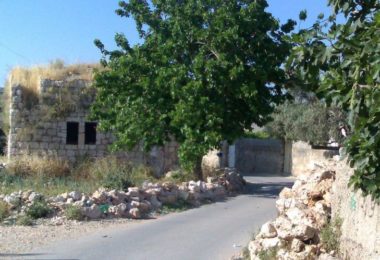 He added that recent pictures revealed the amount of damage caused by the illegal colonists in their repeated invasions into the archeological site, in Basin 18 of Jaloud lands.

Daghlas stated that the colonists have already uprooted dozens of olive trees, fig trees and almond trees in Khirbat al-Qasser, in addition to bulldozing and leveling lands to use them for their events, parties and ceremonies.

It is worth mentioning that Khirbat al-Qasser, along with its 50 Dunams of land, is surrounded by three illegal colonies; Kida, Ahiya and Esh Kodesh, and contains many ancient sites, caves and wells.

Khirbat al-Qasser archeological site is about 800 meters above the sea level and contains structures that date back to the Canaanite era, in addition to the Ayyubid era, along with the Bezantian and Roman eras, and include the foundations of various structures, wells, basins and caves.

Daghlas stated that Israel has been completely preventing the Palestinians from entering the area since the year 2001, under the allegation that “it is close to the settlement outposts,” which were illegally built on Palestinian lands, in direct violation of International Law and the Fourth Geneva Convention.