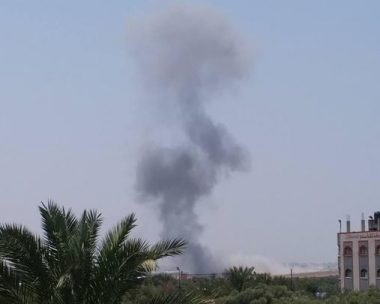 Palestinian medical sources have confirmed, Tuesday, that two young men were injured by a missile fired by an Israeli done in northern Gaza.

The Israeli army said it targeted Palestinians, reportedly flying burning kites from an area near the Eastern Graveyard, east of Jabalia in northern Gaza.

Israeli Ynet News said one of the “incendiary balloons, landed at a school,” in the Eshkol Regional Council of Settlements.

During an assessment meeting with the army’s Gaza Division, including Defense Minister Avigdor Lieberman, Army Chief of Staff Gadi Eisenkot, Shin Bet Director Nadav Argaman, and National Security Advisor Meir Ben Shabat, Israeli Prime Minister Benjamin Netanyahu said his government is prepared for any scenario in the Gaza Strip, and that it will do whatever it can to resolve the situation along the border.

On Saturday evening, July 14th, the Israeli Airforce carried out, on Saturday evening, several airstrikes targeting Gaza, killing two children and wounding at least twenty-five Palestinians in Gaza city, when the missiles struck a building next to a public green park, filled with people.

The sources said the Palestinian Sari Daoud Shobaki, 24, was shot during the Great Return March, when the soldiers and army snipers resorted to the excessive use of force against the nonviolent Palestinian protesters, killing sixty Palestinian on the day alone, and wounding more than 2700 others, including hundreds who suffered serious wounds; many of them later died from their wounds.