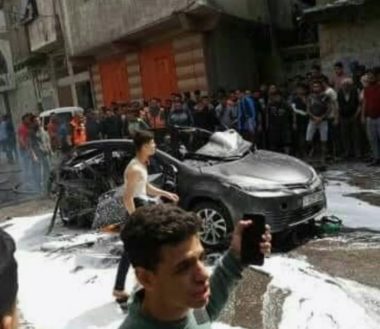 It added that the soldiers also killed one Palestinian, identified as Hamed Ahmad al-Khodary, 34, and injured three others, after the army fired missiles targeting al-KhodaryŌĆÖs car in the ad-Daraj neighborhood in Gaza city.

They were among many Palestinians targeted by the Israeli missiles, leading to several injuries, and serious property damage.

His death was a targeted assassination as Israel claims he was in charge of funneling money from Iran to Hamas movement in Gaza.

In addition, Israeli sources said one Israeli man, 50, suffered a critical injury when a Palestinian shell directly struck his car near Kibbutz Erez, and added that a house was directly hit with a shell in BeŌĆÖer as-SabeŌĆÖ (Beersheba). uffered critical wounds, and two others were seriously injured, on Saturday afternoon, by Palestinian shells in Ashkelon (Asqalan).

According Haaretz, the army spokesperson since the military has struck 260 ŌĆ£targetsŌĆØ in several parts of the Gaza Strip.

In addition, Israeli Channel 7 News said Palestinian shells struck a factory in Ashkelon (Asqalan), killing two Israelis, 49 and 22 years of age, who remained unidentified at the time of this report, and one man was moderately injured.

An Israel man, identified as Moshe Adadi, 58, was also killed by a shell fired from the Gaza Strip.

Earlier Sunday, the Health Ministry said the soldiers killed Mahmoud Sobhi Issa, 26, and Fawzi Abdul-Halim Bawadi, 24, in the al-Boreij refugee camp. Both are members of the al-Quds Brigades, the armed wing of the Islamic Jihad. In addition, an Israeli man, identified as Moshe Adadi, 58, was killed by shrapnel from a shell fired from Gaza into Ashkelon. He is the first Israeli to be killed by a Palestinian shell since the deadly massive Israeli war on Gaza in the summer of 2014.

It is worth mentioning that, as confirmed by Haaretz at the time of this report, nine Israelis were injured by shrapnel from Palestinian shells, among them a woman, 80, who suffered serious wounds, and a man, 50, who suffered moderate wounds.

Although the total number of injured Israelis, in the part 24 hours, was set at 115 at the time of this report, and three were killed.┬Ā Among the injured many who were ŌĆ£hurt while running to sheltersŌĆØ and 60 were treated for ŌĆ£panic attacks.ŌĆØ Haaretz said three of the wounded Israelis suffered serious wounds, and one was moderately injured, 53 lightly wounded, and 55 ŌĆ£treated for shock,ŌĆØ and twenty-eight are in the emergency room and nine are hospitalized.

In addition, Israeli Ynet News has reported that the army has ordered the deployment of a brigade of the Armored Corps along the perimeter with Gaza, in anticipation of further military escalation.

On Saturday, the Israeli army killed a pregnant Palestinian mother, identified as Falasteen Saleh Abu Arar, 37, and her baby girl, Saba Mahmoud Abu Arar, 14 months, after firing a missile at their home in Gaza city.

More than ninety Palestinians, including many women and children, have been injured by Israeli missiles and shells in Gaza.

Among the targeted buildings was ŌĆ£Abdullah al-Hourani Center for Studies and DocumentationŌĆØ which is run by Palestine Liberation Organization (PLO), located in a residential building in Gaza city