Israeli MK Zohar: Palestinians Have No Right to National Identity 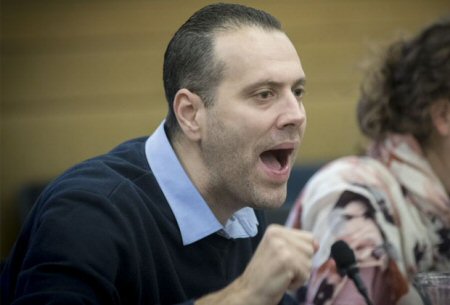 An Israeli parliamentarian has expressed his support for formal apartheid, backing annexation of entire West Bank, but without its Palestinian inhabitants being granted the right to vote.

MK Miki Zohar, who is chair of the Knesset’s Special Committee for Distributive Justice and Social Equality, expressed his views in an interview with Haaretz newspaper.

“When we say to the Palestinians, ‘We are giving you a state, let’s make peace’ – it’s deceiving them,” Zohar told the paper.

“No one is going to give them a state, not the left either. I am saying: Let’s cut this problem off before it begins and stop with the lies. We’ll tell them: ‘Guys, no state, live here with us, prosper, earn a living, educate your children’.”

Asked whether he meant that Palestinians in an annexed West Bank would not vote in the Knesset elections, Zohar replied in the affirmative.

“We must always maintain control over the mechanisms of the state, as the Jewish people that received this country by right and not by an act of charity.”

Over the years it is very possible the Arabs could become the majority here, and I cannot take this risk.

According to Zohar, such views are “not extreme” but “realistic.”

He continued: “In my opinion, he [the Palestinian] doesn’t have the right to national identity, because he does not own the land of this country.”

“I want him as a resident by virtue of my own sense of fairness – because he was born here and lives here, I will not tell him to leave. I’m sorry to say this, but they have one conspicuous liability: They weren’t born Jews.”

With respect to Palestinians with Israeli citizenship, Zohar said: “They will have to choose if they are loyal to the state”, based on three conditions: “national service; recognition of the Israeli flag, which would fly above every public institution; and recognizing Israel as a Jewish and democratic state.”

“And this would not be the decision of an individual, but of a public authority. If they can’t meet these criteria, they would no longer be able to vote for the Knesset.”

Labour MP: Balfour Should Be Marked by Recognizing Palestine