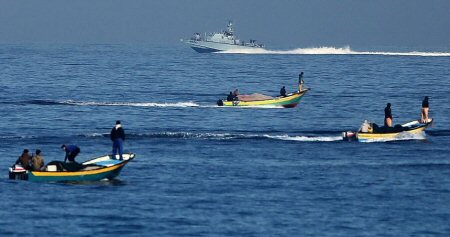 According to PCHR’s investigations, at approximately 13:30 on Thursday, 10 January 2019, Israeli gunboats stationed off  Beit Lahia Shore  opened fire at Palestinain Fishing boats sailing in the sea. The Israeli gunboats then surrounded a fishing boat sailing within 3 nautical miles.

The fishing boat belongs to Khaled Mohamed Meqdad and was manned by Mohamed Mahmoud Ishkontana (22) and his brother, Mahmoud (21), who are both from al-Shati’ refugee camp in Gaza City.

The Israeli naval soldiers then ordered the fishermen to take off their clothes, jump into the water and swain towards the gunboat.  They were arrested in addition to detaining the fishing boat.  At approximately 19:00 on the same day, the Israeli authorities released the two fishermen after interrogating them while the boat is so far under custody.

The Palestinian Center for Human Rights (PCHR) emphasizes that the Israeli naval forces’ attacks on the fishermen in the Gaza Strip are part the collective punishment policy against the Palestinian civilians and violate the right to work according to Article (6) of the International Covenant on Economic, Social and Cultural Rights.  Thus, PCHR: