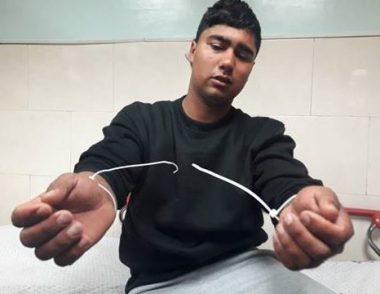 On Tuesday morning, 21 February 2017, Israeli gunboats chased and opened fire at a Palestinian fishing boat. As a result, 5 fishermen, including a boy, were arrested and the fishing boat was confiscated.

The Palestinian Center for Human Rights (PCHR) noticed that Israeli forces have recently concentrated their attacks against fishermen in Gaza Sea, denying them access to their livelihood and free fishing in Gaza Sea.

According to PCHR’s investigations, at approximately 07:30 on Tuesday, 21 February 2017, Israeli gunboats stationed off al-Wahah Shore, west of Beit Lahia in the northern Gaza Strip, opened fire at Palestinian fishing boats sailing within 3 nautical miles and then surrounded a fishing boat belonging to Sabri Mohammed Sa’id Baker (56).

The boat was manned by his 3 children, ‘Abdullah (19); Mahmoud (17) and Mohammed ‘Emran (23) in addition to Thabet Mohammed ‘Abdel Razeq Baker (20) and ‘Omer Mohammed Najib ‘Omer Baker (26). All the aforementioned fishermen live in al-Shati’ refugee camp in Gaza City.

Due to the shooting, Mohammed ‘Emran Baker was hit with a bullet to the left side of his waist and then transferred to Barzilai Hospital in Ashqelon for medical treatment.

The Israeli naval soldiers ordered the fishermen to take off their clothes, jump into the water and swim towards the gunboat. They were then arrested and taken to Ashdod Seaport while their boat and fishing net were kept in custody.

“Due to the heavy shooting at the boat we were on, I was hit with a bullet to the left side of the waist. When the Israeli naval soldiers ordered us to jump into the water, I told them I was wounded, so the soldiers took me to their gunboat’s board. They handcuffed and blindfolded me and then took me to Ashdod Seaport. They brought a doctor to medically examine my wound, and he asked to transfer me to the Barzilai Hospital in Ashqelon to receive medical treatment. At approximately 01:00 on the next day, I was released and taken by a Palestinian ambulance to al-Shifa Hospital in Gaza City for medical treatment. Medical sources there described my wound as moderate.”

PCHR strongly condemns the continued Israeli attacks against Palestinian fishermen in the Gaza Strip and:

1. Calls for immediately ending the chasing policy of fishermen and allow them to sail and fish freely;

2. Demands compensation for victims of the Israeli violations for the physical and material damage; and

3. Calls upon the international community, including the High Contracting Parties to the 1949 Geneva Convention, to intervene to stop all Israeli violations against fishermen and their property and allow them to fish freely in Gaza Sea.