Life under Siege: Artist of War 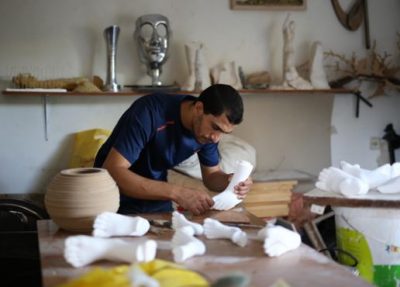 Mohammed Abu Hashish, a young and skilled Gazan sculptor, matured in very harsh conditions due to the occupation. He had to overcome many obstacles and, instead of surrendering, decided to portray his anguish and grief in high-end art pieces.

Mohamed was born in Rafah on November 11, 1988 and raised in a big family consisting of a father, a mother, three girls and four boys. Like most kids in Gaza he studied at UNRWA schools, where he started to develop a passion for art at an early age and revealed it by drawing humble pieces on the board. At the time, artistic skills were given no attention nor encouragement in school and his decision to study fine arts at al-Aqsa University did not bring him any recognition by society either.

However, his talent was quickly recognized by his professor, who offered him a job at his private interior design business. With his help, Mohammed developed connections with other interior architects in the country, gained experience, opened his own atelier and started giving arts classes to school children.

His journey was put on hold during the 2014 offensive, which had a major impact on Mohammed’s life on both a personal and professional level. His family lost a son, Hani, who for Mohammed “wasn’t just a brother or a friend; he was also my assistant in work”. The connection the two brothers had was indescribable, Mohammed said with his eyes full of tears.

The family received the news of Hani’s death on Monday July 23 2014, during Iftar time. They were asked to go to the hospital to identify the body. Hoping and praying to god not to find his brother in the hospital’s mortuary, he recognized Hani’s black shirt and navy pants, reminding him of the last time he saw his brother.

Mohammed adds with a shiver how “the bodies were carbonized, and unrecognizable”. As he describes, “the structure of the skull was absent, the head’s skin was torn apart, there was no body, just a part of one shoulder, the spine, one leg and another half of a leg.” Mohammed’s eyes were full of tears, while saying that “if I knew he would leave the house and never comeback, I wouldn’t have let him go”.

For a while Mohammed gave up on life and could not do any art – it seemed as if life had stopped.

However, he already had an idea for an exhibition before the war, inspired by the emotional experience of finding a baby’s dead body while burying his own grandmother.

The experience of losing his brother and seeing the humiliating condition his body was in, strengthened his feeling that every human being deserves to live and be buried in dignity.

After a year of grieve, Mohammed returned to his atelier and started a project of producing pieces of hands and feet made of beeswax.

The texture of beeswax portrayed honesty to him and he thought that the dimensions and aesthetics of it would resemble the human body, particularly as the color is very close to the human skin. Inspired by his dead brother, Mohammed did not want the project to focus on his personal experience only, but to be devoted to civilian victims of war in general. He created nine pieces from beeswax, which became to be the art pieces for his exhibition “Karamat”.

The exhibition’s title derived its meaning from human dignity, and honor, resembling the Palestinians daily struggle for values the Occupying Power tries to take from them. Karamat reflected the brutal and sad reality Palestinians live in today. The importance of the exhibition was not only to display art, but to show the personal human shock Mohammed and hundreds of families have faced.

The 2014 Israeli offensive resulted in the killing of 2,216 Palestinians – of whom many were buried with their body parts missing.No one on earth would tolerate burying a sibling, relative or a friend with half of their body missing.

The sophisticated pieces reflect the passion, anger and frustration triggered by war. They symbolize the concept of life and death.

Despite the closure, the tragic consequences of the restricted freedom of movement and hard living conditions, Mohammed participated in several local and international exhibitions and workshops.

Among them are: “Our Diaries in Gaza”, which was exhibited in Amman; “Traces”, an exhibition held in Ramallah; and “Blooming Ideas”, which was shown in Gaza, Jerusalem and other parts of Palestine. For his outstanding contribution to the sculptural field, he won Gaza’s First Festival prize for Fine Arts in 2010. His latest and most important exhibition, Karamat, was held in cooperation with the Qattan foundation and the French Cultural Center.

Despite the severe restrictions on the movement of civilians and goods by the Israeli forces, Israel was unable to stop Mohammed in his ambition to reveal his artwork to the world.

PCHR seeks to emphasize cases like Mohammed’s to show how the closure affects their everyday life. They are civilians asking for their fundamental rights. The notion of human rights is regularly being violated as Palestinians are subjected to war crimes and crimes against humanity.

The collective punishment imposed by Israel as well as the 2014 offence had disastrous consequences on the lives of about 1.8 million people.