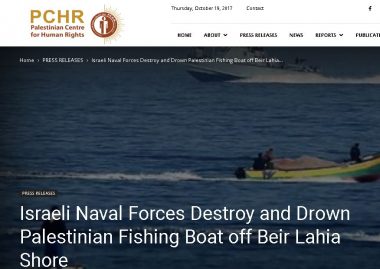 PCHR – 18 October 2017: Israeli gunboats fired shells at a Palestinian fishing boat sailing within 2.5 nautical miles.  As a result, the boat was destroyed and drowned in the Sea.

The Palestinian Center for Human Rights (PCHR) monitored that Israeli forces have escalated their attacks against Palestinian fishermen despite expanding the allowed fishing area from 6 to 9 nautical miles.  This proves that Israel continues its policy of targeting fishermen and their livelihoods.

According to PCHR’s investigations, at approximately 10:00, Israeli gunboats stationed off Beit Lahia shore in the northern Gaza Strip, fired shells at a Palestinian fishing boat holding No. 442 and belonging to ‘Ezz Wajih Mohammed Abu Ryalah (36) from al-Mokhabarat area, northwest of Gaza city. As a result, the fishing boat sailing within 2.5 nautical miles off Beit Lahia shore was totally damaged and drowned in the sea.

It should be noted that Abu Ryalah left his boat at approximately 05:30 on the same day after he finished fishing. The boat is designated for night fishing and transferring the fishing equipment. On the boat, there were 2 generators, 4 flashlights, and paddles.

PCHR hereby condemns the ongoing Israeli attacks against the Palestinian fishermen in the Gaza Strip, and: