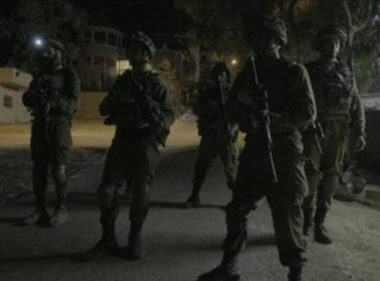 The Palestinian Prisoners’ Society (PPS) has reported that Israeli soldiers have abducted, on Thursday at dawn, seven Palestinians in the West Bank governorates of Ramallah, Nablus and Jericho, in the occupied West Bank.

In addition, the soldiers abducted Riyad Jamal Shalalfa, 31, from his home in Jericho.

In related news, the soldiers invaded many homes in Yatta town, south of the southern West Bank city of Hebron, and violently searched them, before confiscating 6000 shekels, and two cars owned by Mohammad Jibril Abu ‘Arram, and his brothers Ahmad and Mahmoud.

It this worth mentioning that the soldiers also invaded the yards of Darwish Nazzal hospital, in the northern West Bank city of Qalqilia, and fired gas bombs, especially near the Children’s Ward, causing many Palestinians to suffer the severe effects of teargas inhalation.

The soldiers also invaded the Deheishe refugee camp, south of the West Bank city of Bethlehem, searched homes and confiscated a car owned by a wife of a political prisoner.