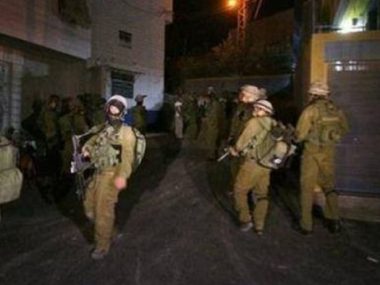 Dozens of Israeli soldiers invaded, on Thursday at dawn, the Deheishe refugee camp, south of the West Bank city of Bethlehem, searched homes and confiscated a car owned by a wife of a political prisoner.

Media sources in Bethlehem said the soldiers confiscated a car owned by the wife of Ahmad al-Moghrabi, who is held by Israel and serving several life terms.

The soldiers also invaded and ransacked many homes in the refugee camp, leading to property damage, and interrogated many Palestinians, while inspecting their ID cards.

The invasion led to clashes between the soldiers and local youngsters, who hurled stones at the army, while the military fired many gas bombs and concussion grenades.

It is worth mentioning that the soldiers also invaded many Palestinian communities in Yatta town,  south of the southern West Bank city of Hebron, and Seer village,  in the northern West Bank governorate of Qalqilia.