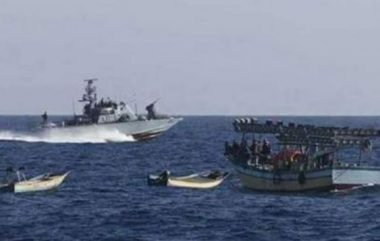 The navy fired many live rounds at the fishing boats, and abducted Nasser Fadel Bakr, and his sons Fadel Nasser Bakr, Ahmad Nasser Bakr and Yasser Nasser Bakr, in addition to his brother Hasan Fadel Bakr.

The attack is part of ongoing Israeli violations against the Palestinians in the besieged and impoverished Gaza Strip.

Israeli attacks against the Palestinian fishermen have led to dozens of casualties, including fatalities, in addition to the excessive property damage and the illegal confiscation of their boats, and the ongoing abduction and imprisonment of the fishermen.

In February of this year, the Israeli navy killed a Palestinian fisherman, identified as Ismael Saleh Abu Ryala, 18, from Shati’ refugee camp, west of Gaza city, and injured two others.

In May of last year, the navy killed a fisherman as Mahmoud Majed Bakr, 25, in a similar violation, less than four nautical miles from Gaza shore.