Israel’s Siege of Gaza is Anything But Legal 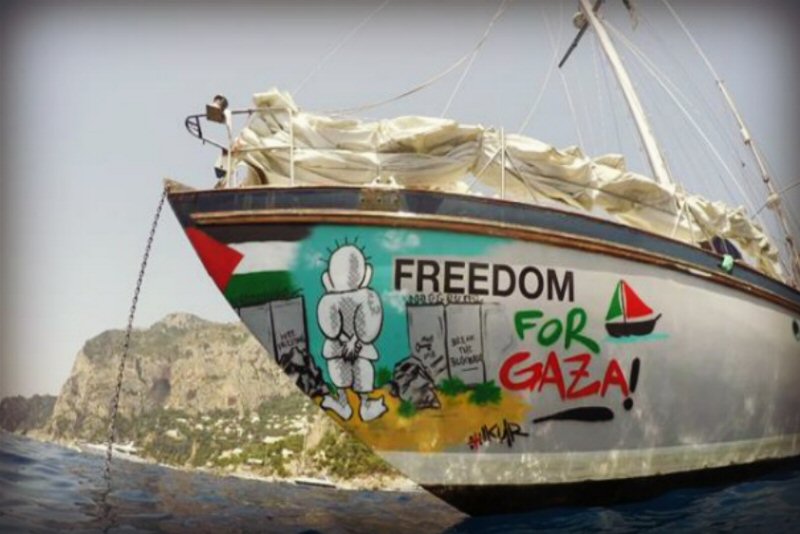 On Sunday, 29 July, Israeli commandos boarded a boat taking part in a Freedom Flotilla which was taking humanitarian aid to the besieged Gaza Strip. The boat — Al-Awda (The Return) — was captured by Israel while sailing in international waters. If anyone else had conducted the raid, it would have been condemned as an act of piracy on the high seas. Instead, Israel stopped the much-needed aid going to the 2 million Palestinians in what has been described as an open-air prison.

Twenty humanitarian activists from around the world were on board Al-Awda. They have since reported that they were humiliated and beaten by the Israelis who captured them. Yonatan Shapira, a former Israeli Air Force officer who was on board the boat, said that the commandos beat them up, tasered several people and stole most of the passengers’ and crew’s property.

Commenting on the attack, the Israeli military tweeted: “The boat was tracked and stopped in accordance with international law.” Israeli Prime Minister Benjamin Netanyahu hailed the commandos for “their determined and efficient action in detaining the passengers on the [Al-Awda] ship that tried to reach the Gaza coast in contravention of the law.”

Last Saturday, 4 August, at dawn, Israeli commandos raided and seized another boat in the Freedom Flotilla, which was also on its way to deliver medical aid to the coastal enclave, which has been under a tight Israeli-led blockade for 12 years. The siege has resulted in severe shortages of medicines, medical equipment and medical disposals that all hospitals and patients, including those in besieged Gaza, depend on.

Yet again, the Israelis claimed that the ship “was monitored and intercepted in accordance with international law.” They added that the ship’s passengers were told that they “violated the legal naval blockade” imposed on Gaza.

The Israeli occupation authorities and officials, including Netanyahu, keep describing the siege as legal and claim that it is imposed within international law. Such claims are based on the lie that the Israeli Navy is stopping weapons from getting to the Palestinian resistance groups. Their resistance to Israel’s military occupation, by the way, is entirely legitimate according to international laws and conventions.

The reality on the ground is that Israel is blockading 2 million Palestinians in Gaza and tightening restrictions in order that they might take to the streets and overthrow Hamas. This is what the Western-backed Palestinian Authority did in the occupied West Bank, with the help of the Israeli occupation forces, in 2007, shortly after the Islamic Resistance Movement won the “free and fair” democratic elections across the occupied Palestinian territories.

International organisations were prompted to investigate the legality of the Israeli siege by a 2010 attack by commandos on another Freedom Flotilla. Nine Turkish nationals were killed by the Israeli troops as they sailed to Gaza in an attempt to break the siege and deliver vital humanitarian aid; a tenth died later of his injuries. Yet again, the Israeli attack took place in international waters; yet again, it had all the hallmarks of an act of piracy on the high seas.

Throughout the 12 years of the Israeli siege on Gaza, many UN officials and human rights groups have described what the Israeli occupation is doing in and to Gaza as illegal and a flagrant violation of international law. In 2010, the International Committee of the Red Cross (ICRC) said that the blockade of Gaza violates the Geneva Conventions and called for it to be ended. “The whole of Gaza’s civilian population is being punished for acts for which they bear no responsibility,” said the ICRC in a five-page statement. “The closure therefore constitutes a collective punishment imposed in clear violation of Israel’s obligations under international humanitarian law.”

The Head of ICRC Operations for the Middle East, Beatrice Megevand-Roggo, commented, “We are urging Israel to put an end to this closure and call upon all those who have an influence on the situation, including Hamas, to do their utmost to help Gaza’s civilian population.”

Following the ICRC statement, a panel of five independent UN rights experts reported to the UN Human Rights Council, stressing that the Israeli blockade on the coastal enclave had subjected Gazans to collective punishment in “flagrant contravention of international human rights and humanitarian law.” The UN Mission, which investigated the Israeli blockade on Gaza and found it was imposed as a result of the Palestinians participating in free elections, said: “The Mission considers that one of the principal motives behind the imposition of the blockade was a desire to punish the people of the Gaza Strip for having elected Hamas. The combination of this motive and the effect of the restrictions on the Gaza Strip leave no doubt that Israel’s actions and policies amount to collective punishment as defined by international law.”

The UN Office for the Coordination of Humanitarian Affairs (UNOCHA) and the United Nations Relief and Works Agency (UNRWA) have also said that the siege is illegal. UNOCHA called it “collective punishment, a violation of international humanitarian law,” while the former UN High Commissioner for Human Rights, Navi Pillay, stated that it “is illegal and should be lifted.”

All of this makes it very clear that Netanyahu and his cronies are lying when they claim that the siege of Gaza is legal. So too are members of the pro-Israel Lobby in world capitals as they seek to influence politicians, aided and abetted by a compliant mainstream media.

Anna Dressler, a Swedish activist who was on board Al-Awda, described Gaza accurately when she said that it is a place where human rights laws seem to have been forgotten. “I believe that every person can change the world, in their own way, wherever they are and in whatever way they can,” she added. “Let’s start here, with a blockade that should never have existed and yet continues, along with all other man-made catastrophes.”

According to Yonatan Shapira, those of his former colleagues in the Israeli armed forces who are blocking the efforts to break the siege should really think about what they will tell their grandchildren in years to come. “Don’t think about what your friends will say about you today, think about your grandchildren. Refuse to take part in this ongoing war crime. Refuse to continue murdering people who are locked in the biggest prison in the world. I was once one of you and I know that among you there are some who can still think. Refuse to be the guards of the Gaza ghetto.”