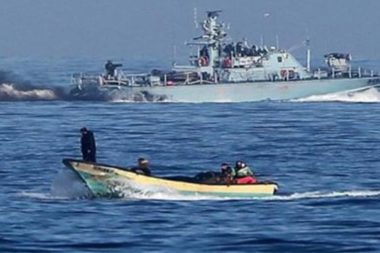 Israeli navy ships fired, on Thursday morning, many live rounds at Palestinian fishing boats, and attacked them with water cannons, in Gaza territorial waters, in the Sudaniyya Sea area, northwest of Gaza city.

The Palestinian fishermen’s syndicate in Gaza said the fishing boats were less than three nautical miles in the Palestinian waters when the navy attacked them, causing damage.

It added that the fishermen had to sail back to shore without being able to fish and provide for their families, in fear of further Israeli violations.

The attack is the latest in ongoing assaults and violations carried out by the navy against the fishermen and their boats.

The violations, including those targeting farmers on their own lands near the perimeter fence, have led to hundreds of casualties, including many fatalities, in addition to the frequent abductions of the fishermen and the confiscation of their boats.

Furthermore, the soldiers abducted, on Thursday at dawn, two Palestinians, and stormed many homes in Bethlehem governorate, in the occupied West Bank.

In related news, the soldiers abducted three Palestinians from their homes in Salfit governorate, in central West Bank.