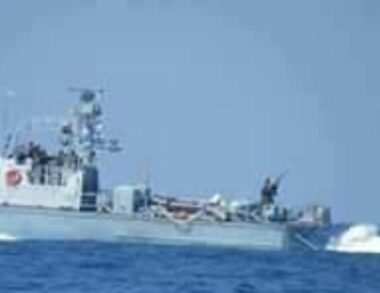 Israeli navy ships fired, on Monday morning, two shells at Palestinian fishing boats near the shore in the central part of the Gaza Strip.

The navy fired the two shells at the boats while sailing less than six nautical miles in Palestinian territorial waters, a fisherman who witnessed the attack said.

He added that the shells did not hit the fishing boats but exploded near them, forcing the fishermen back to the shore without being able to fish to provide for their families.

The attack is part of the numerous Israeli violations targeting the Palestinians in Gaza territorial waters, in addition to farmers, workers, and shepherds on lands close to the perimeter fence in the besieged and impoverished coastal region.

Israel repeatedly expands and reduces the fishing zone in Gaza, from three to six then to nine, and back to three or six, while the Oslo agreements between Israel and the Palestine Liberation Organization clearly set the fishing zone in the Gaza Strip to twenty nautical miles.

Earlier Monday, the soldiers, stationed across the perimeter fence, fired many live rounds at Palestinian farmers on their lands, east of Khan Younis, in the southern part of the Gaza Strip.