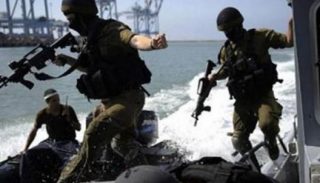 Palestinian medical sources have reported that one fisher was shot and injured by Israeli navy fire, and four others were kidnapped, after the navy ships attacked them in Gaza waters, near the shore of Wadi Gaza area, southwest of Gaza city.

The Palestinian News & Info Agency (WAFA) quoted a fisher stating that the Israeli navy fired many live rounds, targeting several fishing boats, wounding one fisher, before the soldiers kidnapped him along with four others.

WAFA added that the navy confiscated two fishing boats that were attacked by its fire, after abducting the fishers.

A similar attack took place in Palestinian waters in Deir al-Balah, in central Gaza, forcing the fishers back to shore.

In addition, the navy ships surrounded two fishing boats in Gaza Sea, and boarded them before kidnapping four fishers, and confiscating their boats.

On Monday, Israel unilaterally decreased the fishing zone in the areas extending between Gaza Valley and Rafah to six nautical miles, less than two months after increasing it to nine.