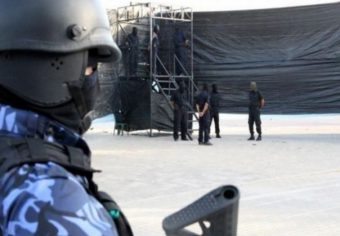 The (Shams) Human Rights and Democracy Media Center issued a statement strongly denouncing the Hamas authority in Gaza for executing three condemned Palestinians, on Tuesday at dawn, and considered it a violation of the Basic Palestinian Law.

“Article 109 of the Basic Palestinian Law states that only the president can approve or deny any execution of a condemned person, as also stated in article 409 of the Penal Law #3 of 2001,” Shams Center said, “Article 408 of the same law states that whenever capital punishment becomes final, the Justice Minister must sign his approval, before sending the documents to the president.”

The center also stated it does not call for pardoning persons convicted of serious crimes, but affirms its strong position that capital punishment must be replaced by another form of punishment that respects the human life and dignity.

It added that capital punishment is the worse type of deliberate murder, in addition being a cruel and unusual punishment that does not fulfill the goals of deterrence. Shams stated that executions were the only form of punishment that cannot be retracted once implemented, especially in cases where the executed persons are later found innocent.

The three executed Palestinians were among thirteen condemned to death in the Gaza Strip, after they were convicted of committing several crimes.

Dr. Hanan Ashrawi, a member of the Executive Committee of the Palestine Liberation Organization (PLO), strongly denounced the Hamas decision  to execute the 13 convicted Palestinians, and called on the Palestinian President and the government, to abolish capital punishment.