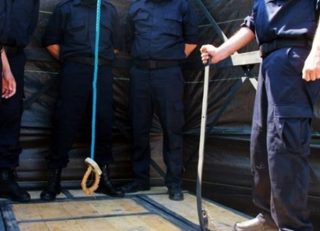 The Hamas-run Interior Ministry in the Gaza Strip has supervised, on Tuesday at dawn, the execution of three convicted Palestinians, despite repeated calls and condemnations from human rights groups.

The Hamas-affiliated Palestinian Information Center said the three Palestinians were convicted of several crimes, including murder, committed more than a year ago.

It added that the executions took place in the Central Prison, in Gaza, and that several officials and representatives attended the executions.

The Prosecutor’s Office in Gaza said “it implemented justice,” and that the executions are what it called a “deterrent to prevent future crimes,” adding that one of these crimes was the murder of Thorayya al-Badri, in her seventies, who was killed after robbers invaded her home.

It claimed the executions were carried out after all appeals were filed, and denied, and after all legal measures were concluded, and added that it would conduct “all measures to protect the society from any violation that would threaten the society’s security and peace.”

The executions were made without the approval of Palestinian President Mahmoud Abbas, in direct violation of the basic Palestinian law, but Hamas has already executed many Palestinians since the internal conflict erupted between Fateh and Hamas in 2007.

The three executed Palestinians were among thirteen condemned to death in the Gaza Strip, after they were convicted of committing several crimes.

Hamas legislators in Gaza authorized the executions without the approval of the Legislative Council, and above all, the president who must personally approve each execution, as stated in the Palestinian Law, and amidst condemnation by human rights groups demanding the abolition of capital punishment.

On her part, Dr. Hanan Ashrawi, a member of the Executive Committee of the Palestine Liberation Organization (PLO), strongly denounced the Hamas decision to execute the 13 convicted Palestinians, and called on the Palestinian President and the government, to completely abolish capital punishment.