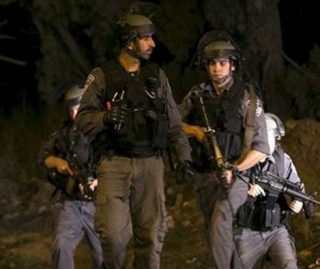 Israeli soldiers have kidnapped, on Tuesday, fourteen Palestinians, in different parts of the occupied West Bank, the Palestinian Prisoners Society (PPS) has reported.

The PPS added that the soldiers also kidnapped Bara’ Farid Abu Eth-Heir, while crossing back to the West Bank through the al-Karama Border Terminal with Jordan, and Ahmad Sallaj, who was taken prisoner after the soldiers stopped him at the Huwwara roadblock, near Nablus.

In the Central West Bank city of Salfit, the soldiers kidnapped Omar Rasheed al-Abboushi, 19, after invading his home.

Furthermore, the soldiers kidnapped Dia’ Hasan al-Badan, 16, and Bassam Taleb al-Badan, 20, from their homes, in the West Bank city of Bethlehem.