Israeli Navy Shoots And Injures A Palestinian Fisherman In Gaza 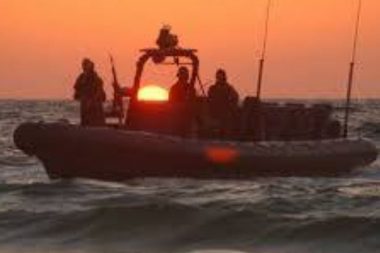 Israeli navy ships opened fire, on Tuesday at dawn, on several fishing boats in Palestinian territorial waters, close to the shore in the Sudaniyya area, northwest of Gaza city, and injured a fisherman.

Medical sources said the wounded fisherman, 24 years of age, was shot in the leg, and suffered a moderate injury, before the medics moved him to the Shifa Medical Center, in Gaza city.

Following the attack, the fishermen had to sail back, without being able to fish, in fear of further Israeli escalation.

The attack is part of ongoing Israeli violations, targeting the fishermen and their boats, including deliberately destroying their boats and nets, in addition to frequently abducting them and confiscating their boats.

On Monday, May 15, 2017, a Palestinian fisherman, identified as Mohammad Majed Bakr, 25, was killed after Israeli Navy ships opened fire on fishing boats less than four nautical miles from the Gaza shore.