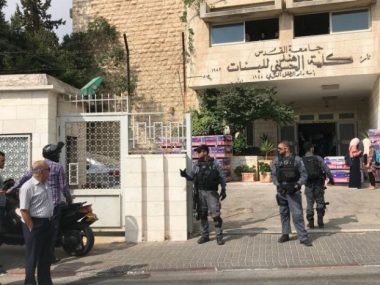 Dozens of Israeli police officers prevented, Saturday, Palestinian academics, intellectuals and religious leaders from holding a conference  at a Palestinian college in Sheikh Jarrah neighborhood, in occupied Jerusalem. The Israeli officers also issued an order shutting the educational facility down.

The WAFA Palestinian News Agency said the conference was organized by Waqf and Heritage Reservation Society and the Islamic Supreme Committee, in Jerusalem, and was funded by the Jerusalem Waqfiya Fund headed by Palestinian businessman and philanthropist Munib al-Masri.

WAFA added that the police detained al-Masri, and took him to an interrogation facility, in occupied Jerusalem.

The attack is the latest in a series of Israeli violations targeting conference, meetings and various social, religious and political activities in the occupied city, as part of its attempt to solidify its full control over all aspects of life in Jerusalem.

Following the attack against the education facility, the Palestinian Education Ministry issued a statement strongly condemning the Israeli violation, and its constant attempt to disrupt the cultural and educational process in occupied Jerusalem.

The Health Ministry also denounced the illegal Israeli order shutting the campus down until further notice.

It said the invasion is part of Israel’s ongoing crimes and violations against the Palestinian people, including their educational facilities.

The Ministry added that Israel is encouraged by the deadly silence of the international community, and the unconditional support it receives from the United States.

“We have seen how Israel demolished a school in Yatta, near Hebron, how the soldiers surrounded al-Khan al-Ahmar, near Jerusalem, including its school,” the Ministry said, “Israeli is imposing severe restrictions on teachers and students, which is in serious violations of International Law.”

It called on all local, regional and international media and human rights organizations to expose the Israeli violations, and act on protecting the Palestinians and their basic rights to live in peace, without the constant harassment, violations and ongoing threat of violence by the occupation, endangering the children and the entire educational process.”

Under international law, East Jerusalem, which fell under Israeli occupation along with the West Bank and the Gaza Strip in 1967, is an occupied Palestinian city, the capital of the future independent Palestinian State.