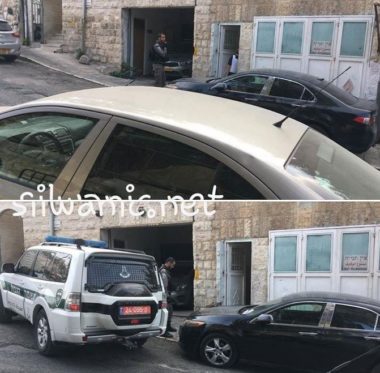 Israeli police officers and several employees of the City Council of occupied Jerusalem, invaded on Friday at noon, Silwan town, south of the Al-Aqsa Mosque, and photographed many homes and stores.

The invasions targeted the neighborhoods of Ein al-Louza, Wad Yasoul and Wadi Hilweh, in Silwan.

The Wadi Hilweh Information Center in Silwan (Silwanic) has reported the officers took pictures and detailed information of many buildings in the three neighborhoods, in addition to inspecting the ID cards of many Palestinians, and writing their information down, before withdrawing.

Silwanic added that the police and City Council employees invade the town weekly, before photographing homes and commercial buildings, in addition to barns and farms, and threaten to demolish them for being “built without permits.”

It is worth mentioning that teams of the Israeli Nature and Parks Authority also repeatedly invade Silwan, and issue warnings and fines against land owners, after demanding them to remove wood or other materials they have there.