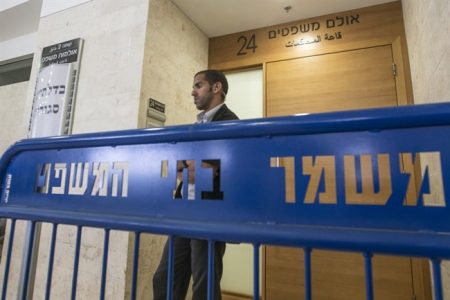 An Israeli court indicted a teenage Israeli settler, this Sunday, for allegedly attacking a Palestinian man in Jerusalem, over an Israeli woman the settler thought was in a relationship with the Palestinian, Israeli news daily Haaretz reported, according to Ma’an.

The settler, who lives in the illegal Modiin Illit settlement, in the occupied West Bank, was identified as 18-year-old Yehiel Weisenstern. He was charged by a Jerusalem district court with aggravated assault and committing a racially-motivated hate crime.

According to Haaretz, the indictment said that Weisenstern saw the victim, identified only by his first name Mohammed, walking with a female Jewish friend who works with him in the Mahane Yehuda market area of downtown Jerusalem.

Weisenstern and two friends, who Haaretz said were unknown to authorities, allegedly became aggressive after Mohammed turned down their request for a cigarette.

The suspect and two friends began to follow Mohammed and his female friend, who the three Israeli men inquired about with regard to her Jewish ethnicity. According to the indictment, they then asked Mohammed “why he was going out with a Jew.”

According to Haaretz, when Mohammed tried to explain that he and the woman worked together, the suspect or one of his friends allegedly took out a knife from his pocket and said to him: “You’re dating Jewish girls. We will **** you today!”

One of the three Israeli men then began punching Mohammed, who tried to flee. Mohammed eventually stopped running, at which point “the suspect and the others surrounded the complainant and started cursing him, telling him he wouldn’t be allowed to work in the market anymore and that they would screw him,” Haaretz additionally quoted the indictment as saying.

Weisenstern and his friends then began punching and kicking Mohammed until a passerby separated them. Mohammed reportedly suffered from injuries to his head, back, stomach and legs.

Hundreds of thousands of Israelis living in Jewish-only settlements across occupied the West Bank, in violation of international law, often commit attacks Palestinians, with activists and rights groups having long accused Israel of fostering a “culture of impunity” for Israeli settlers and soldiers who commit such acts.

Opinion/Analysis 09/11/17: Netanyahu Has Lost the Freedom of Speech Game