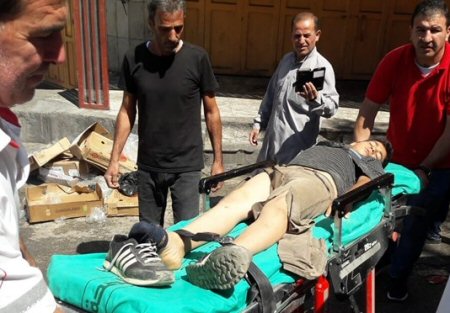 A 16-year-old Palestinian teen was hospitalized after an Israeli settler ran him over, on Friday, in the Tel Rumeida neighborhood of the southern occupied West Bank city of Hebron.

Witnesses told a Ma’an reporter that an Israeli settler deliberately ran over the Palestinian teen with his vehicle, in Hebron City.

The teen was identified by locals as Munir Abdullah Gharib, aged 16.
Mounir suffered injuries from the attack, and was immediately transferred to the Alia Governmental Hospital in Hebron, for necessary medical treatment; his condition remained unknown.

Incidents involving Israeli settlers hitting Palestinians, in the occupied Palestinian territory, are a relatively regular occurrence, and are usually treated by Israeli security forces as accidents, even in cases when witnesses claim the car rammings were deliberate.

Some 800 notoriously aggressive Israeli settlers now live under the protection of the Israeli military in the Old City, surrounded by more than 30,000 Palestinians.

Palestinian residents of Old City Hebron face a large Israeli military presence on a daily basis, with at least 32 permanent and partial checkpoints set up at the entrances of many streets.

Additionally, Palestinians are not allowed to drive on al-Shuhada street, have had their homes and shops on the street welded shut, and in some areas of the Old City, are not permitted to walk on certain roads.